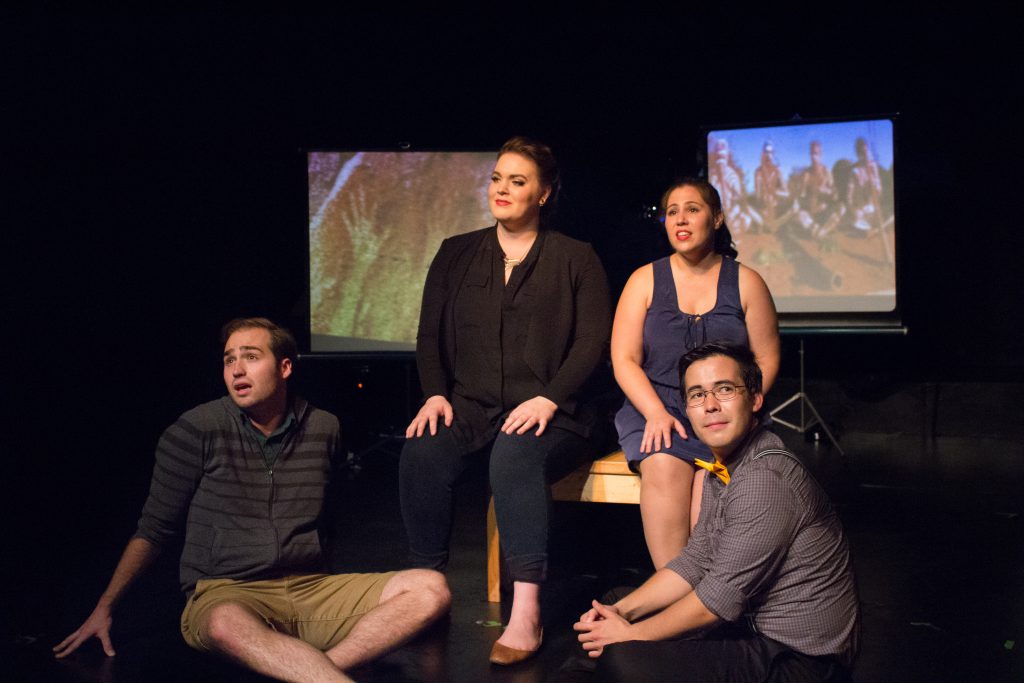 One would like to like “Now. Here. This.,” the 2012 musical receiving its local premiere courtesy of Brown Paper Box Co. at the cozy Rivendell Theatre. The youthful cast, directed with artful simplicity by M. William Panek, sings its heart out while radiating sincerity. And the backup band—with Justin Harner on keyboard, Conor Foley on guitar, Matt Ulm on bass and Jon Levitt on drums—is tight, tuneful and altogether professional.

The only problem is the work itself, a mélange of pop-music clichés that’s trying way too hard to make us happy. Geared to perceived millennial tastes, Jeff Bowen’s music and lyrics and Hunter Bell and Susan Blackwell’s book hit every expected note about the travails of middle-class American adolescence, those days of whine and neurosis.

Actually, adolescence would be a step forward for the show’s four unnamed characters, who are stuck emotionally and intellectually at about age ten. The two men (Nick Shoda and Matt Frye) are particularly infantile in taste and temperament. The women (Neala Barron and Anna Schutz), while outwardly more mature, are equally self-absorbed.

For reasons never explained, the foursome join together to visit a museum of natural history, first listening to a lecture on cosmology given by what sounds like John Cleese imitating Carl Sagan. They then stroll through the exhibits, which are projected on screens as the protagonists move through the themes and phases of life.

The idea of showing how every life recapitulates ancient, universal patterns is not a bad one, as Terrence Malick showed in his epic film “Tree of Life.” But Bowen, Bell and Blackwell aren’t aiming quite that high. What we get are stretched segues, as when a photo of the flamboyant lyrebird reflects one character’s need for attention and an exhibit on volcanic eruptions triggers a song about blush-worthy bad moments.

The show has some rousing songs and positive messages about authenticity and embracing life. But the peppy, showy, up-tempo numbers quickly become interchangeable. A love song or two would help but the characters are too wrapped up in their own dramas to wax romantic about somebody else. Toward the end, a character declares, “In all reality I love my life, and there’s no one I’d rather be.” Therapeutically satisfying, perhaps—but dramatically and musically, not so much. (Hugh Iglarsh)