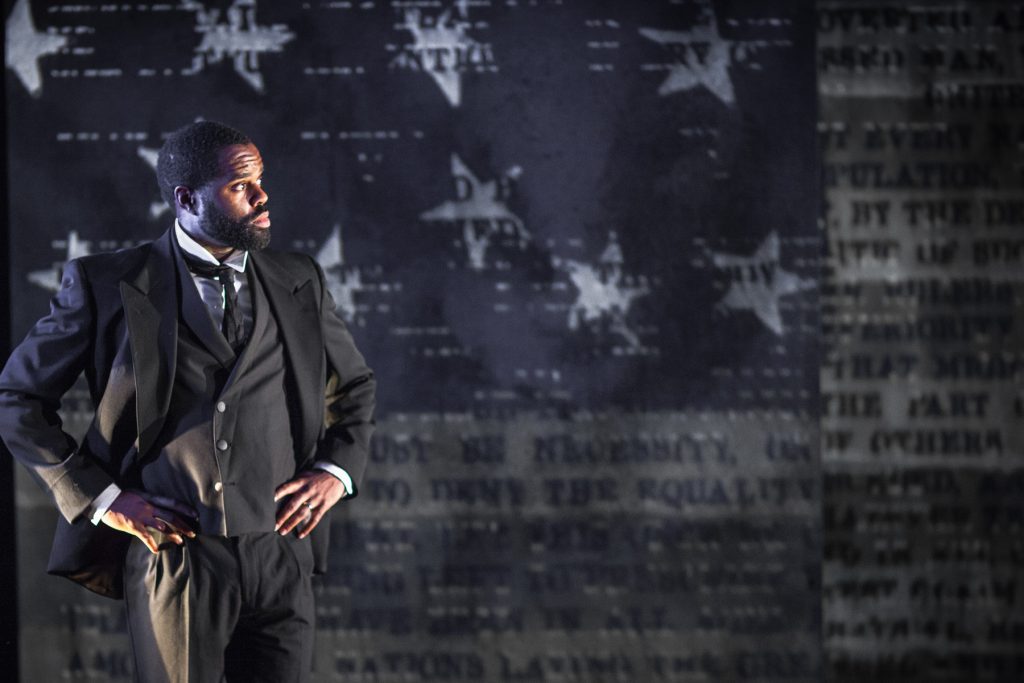 “Douglass” wants to be an antebellum epic. The austere blank stage, bare apart from three long sheets at the back and a corner of rotting, torn up wood, is just wide enough to evoke images of great halls where treatises are signed and people argue with the noblest of intentions. Detailing the partnership-cum-feud between Frederick Douglass and William Garrison, “Douglass” teaches quite a bit and neatly sums up in tidy little boxes a series of what must have been extremely brutal scenes.

The story here is huge in scale: warring politics and dividing factions, all swirling around Douglass (De’Lon Grant) and Garrison (Mark Ulrich) in a time when speaking out against slavery would certainly kill your reputation and also quite possibly end your life. The two abolitionists are both impassioned, fiery men. While “Douglass” prodded my curiosity about the history behind the play, there’s a missed opportunity here.

The subject matter is well-chosen but the presentation is uncomfortably formal and cold. It feels like the viewpoint of an academic, reducing the story to a series of polarized debates over the nature of social politics and Constitutional theory. That perspective wasn’t entirely uninteresting, but there was a strange wash over the stage that distanced the action from the history it was presenting. When Grant talks about Douglass’ time as a slave, it doesn’t feel personal. It feels triumphant. Thomas Klingenstein’s script is showing the historical, mythic figure of Douglass, not Douglass the human being.

Which is a shame: whenever the play gets personal, specific and intimate, there’s some real spark to it. Kenn E. Head’s Martin Delany is ardent and persuasive, allowing him enough flexibility to make interesting choices. Scenes between Douglass and Mr. Davis (John Lister), though still steeped in political speech, maintain a sense of camaraderie that loosens up Grant long enough for the scenes to have a giggle or two.

Frederick Douglass is an American legend but we’re walking the same earth as he did. “Douglass” might have benefited from imagining that Frederick had a heart like you or me. (Jay Van Ort)