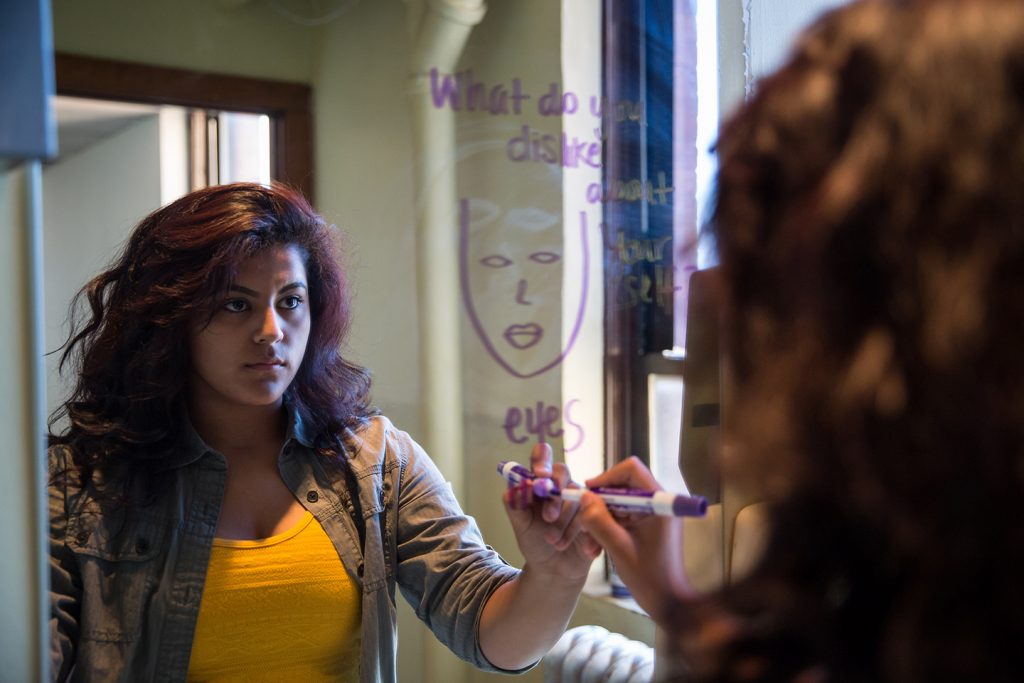 There’s an uncanny effect that occurs when you witness high-school characters being played by actual high schoolers. After all, mainstream media would have us believe that this is what teenagers look like. That effect takes on a deeper dimension in Albany Park Theater Project and Third Rail Projects’ immersive masterpiece “Learning Curve,” where the characters in question are Chicago Public School students from the kinds of ethnic backgrounds toward which our culture at large has been at best tolerant and at worst outright hostile. That these characters are played with heartbreaking intuition by CPS students of similar circumstances lends “Learning Curve” a rabbit-hole quality, drawing us further into a world that is at once immediate and real yet fueled by the unlimited imagination of these young performers.

With “Learning Curve,” APTP and TRP have devised a piece whose stakes are of acrophobia-inducing height. The “students” are repeatedly reminded that their academic performance will be the primary determinant in not only their own future but the future of their school. Yet the production’s execution feels almost routine, as if this were not a performance but rather just another day at a Chicago Public School on the verge of collapsing in on itself.

Locally rooted (in one scene, a teacher plays “‘63 Boycott,” a documentary about the movement to desegregate CPS in the 1960s as captured by local documentarians Kartemquin Films), but extensive in its grasp of growing pains of all varieties, “Learning Curve” blends the racial history of Chicago and beyond with hard-fought optimism from those with the most to gain (or lose) from the potential outcomes of policy and protest.

Here politics are matched by young love; it’s prom season at the fictional Ellen Gates Starr High School. Elsewhere, potentially triggering realism (scenes of bullying have been known to be interrupted by distressed audience members) is finely balanced by frenetic movement. These beautifully crafted visual metaphors wordlessly capture the perpetual anxiety of adolescence especially for students whose lives outside the walls of school are anything but predictable.

To say that the choreographic and technical ambitions of “Learning Curve” are enormous would be a profound understatement. Charged with the task of designing for multiple simultaneous scenes across four floors and countless interactions that range from group art projects to intimate one-on-one encounters (the walk-in-closet-sized library on the top floor with its old-soul book lover is apparently an envy-inducing destination), composer and sound designer Mikhail Fiksel has created a gently suggestive and astonishingly attentive soundtrack that complements the action of each space while maintaining a contemplative yet restless atmosphere overall. Meanwhile, Lee Keenan’s lights shift ever so subtly from the cold rays of overhead fluorescents to evocative pockets of radiant warmth.

At a time when issues of representation are at the forefront of conversations about entertainment (and politics too, for that matter), the most important aspect of “Learning Curve” is that those who will reap the greatest rewards from this production are the performers themselves. The act of translating their experiences directly into art, as opposed to the process of finding resonances indirectly through the sadly limited number of plays written for non-white performers (that is if they can even get cast in them), means that “Learning Curve” never stops evolving and growing. Like the mirror exercise popular in high school theater rehearsals, observing these promising actors is the equivalent of watching action and reaction simultaneously. Their performances gently outline the permeable boundary of the world as it is and the world that can be as conceived by the brave, the young, the vulnerable and the sincere.

The “learning” in this outstanding and unforgettable production likely refers to the seemingly contradictory emphasis in academic environments on individuality and collective identities. But it can also refer to life itself, that place just beyond the doors and windows, which crawls ceaselessly forward. It is a vital reminder that for many people in our city and elsewhere, young or otherwise, the ongoing conversations on race, education and social justice are not simply theoretical. They are practical and of paramount importance.

Midway through my journey I found myself seated in a classroom preparing to take a standardized test. Across from me a teenage girl twirled her pencil, looking pensively from her closed test booklet to the door. Shortly after we started, she began a quiet monologue about her talents, strengths and desires: photography, listening, traveling. She raised her head from her worksheet and stared at me. I met her gaze. It was impossible to look away. And even if I could have, that young woman, with all her hopes and dreams, would have still been there, waiting. (Kevin Greene)