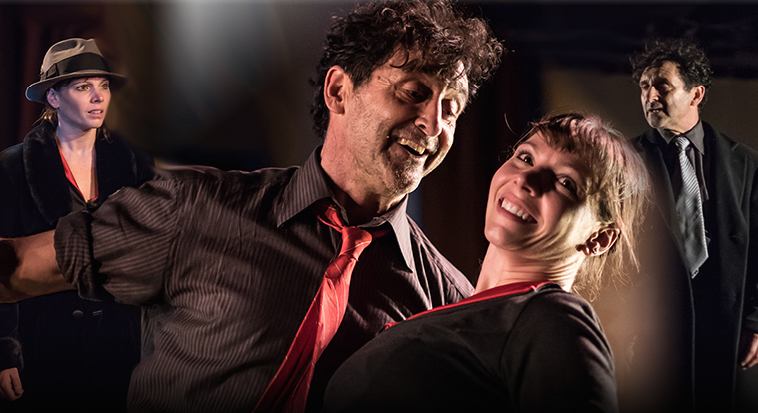 The strength to be both true to one’s own nature while emotionally open to others is the theme of Jump Rhythm Jazz Project founder Billy Siegenfeld’s first foray into evening-length dance theater. Equal parts dialogue and dance, “Jimmie Blues” follows the slowly budding relationship between a hard-boiled private eye (Siegenfeld in the title role) and a tough, mysterious dame by the name of Margie Rizzabolli (Jordan Batta), from guarded suspicion to friendship to school kid romance. Sure, the trope has been done to death, but it’s nice to think that when alone in his office, a PI might be, in addition to drinking bourbon and staring into the middle distance, dancing his heart out to hip-hop and blues. Dance is the vehicle of self-expression for both characters, but secretly so: Siegenfeld’s rooted, scatting, contained-pressure-to-pop Jump Rhythm technique is the valve for his characters’ pent-up frustrations when alone in their respective rooms. The two ultimately come together by putting on a show-within-a-show, going on stage before each other and the world and learning how to dance with a partner.

An early showing of “Jimmie” gave a peek into a gently rendered fable of authenticity and vulnerability. Siegenfeld, who wrote the show, keeps his story line and dialogue spare, riffing on a few simple ideas from the mouths of archetypes of yesteryear, albeit archetypes who enjoy slipping in literary references and showing other moments of wry self-awareness. The hour-length show has its flaws to be sure—Batta is clearly a dancer first, thespian second, and a thread or two is introduced and abandoned, like the alleged missing neighbor Rizzabolli is supposedly looking for—but the humor (Siegenfeld’s comic timing is spot on), sincerity and nostalgic charm of the show ultimately resonate, and the intimacy of Links Hall is an apt setting. (Sharon Hoyer)