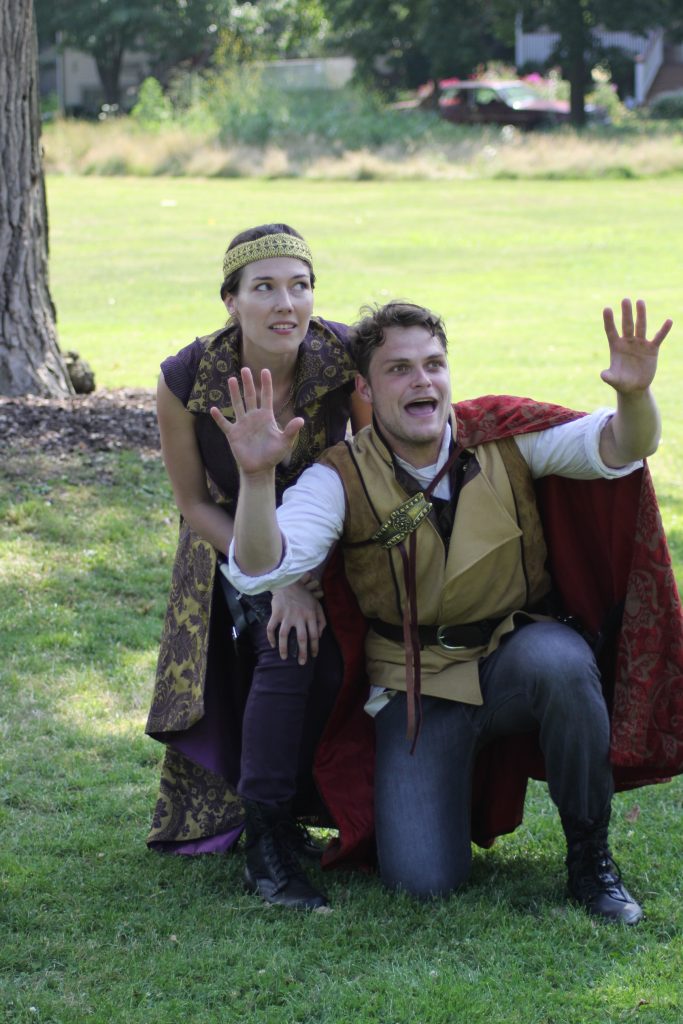 A précis of Shakespeare’s Wars of the Roses history plays, set appropriately in a garden, presented free of charge—what better way to spend a late summer afternoon? In fact, it would be perfect, if they would only clue us in about exactly who these doublet-clad people are and why they are so eager to off one another. But more on this later.

Muse of Fire founder and artistic director Jemma Alix Levy has cunningly stitched together scenes from “Henry VI” and “Richard III” to create a new play about Queen Margaret, the instigator and eventual victim of the civil strife that wracked late medieval England. Levy and co-director Lisa Uhlig, together with a tiny but game cast, give us seventy-five minutes of cogent, well-delivered and gimmick-free Shakespeare.

Annelise Dickinson stars as the title-rich but land-poor princess who snares and (at least according to Shakespeare) cuckolds a king, the pious but inept Henry VI of England. Dazzling seductress, calculating politician, Amazon warrior, Margaret is an intriguing figure in both senses of the term, and Dickinson sizzles in this juicy part.

She’s well-supported by her three male colleagues, including Curtis Dunn as the prayerful Henry, who isn’t up to the wet work of kingship and so delegates it to his queen, who is handy with a bare bodkin. Cory Lipman is equally convincing as Suffolk, the combination courtier and gang-banger who is Margaret’s lover and co-conspirator. And Jon Beal—who also choreographed the sweatily intense sword fights—shines in the antithetical roles of loyal Gloucester, the first victim of Margaret’s machinations, and sniggering Richard Plantagenet, the hunchbacked monster of ambition who ends up with both the throne and Margaret’s resonant curse.

“Queen Margaret” succeeds beautifully in evoking the “tiger’s heart wrapped in a woman’s hide” that is its passionate, grasping, scheming and suffering protagonist. But it fails to explain and contextualize the convoluted dynastic politics that drive the nonstop power struggles, which are linked to similarly endless and complex wars in France. Good dramaturgy is half the battle with Shakespeare. I hope that in the future this talented troupe does more to help its twenty-first-century audience make sense of the old tales it so skillfully presents. (Hugh Iglarsh)