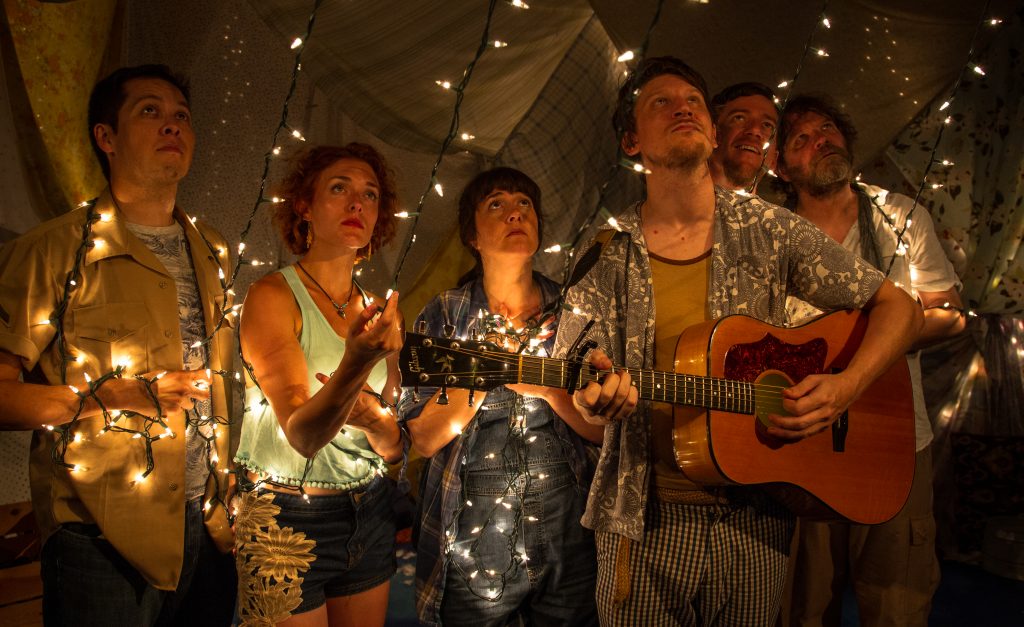 Myths are the original bedtime stories. They offer an edifying vision of the way the world works. Or rather, the way it should work. It takes becoming an adult to recognize that little caveat. Written by Christian Stokes and devised and performed with thrifty enthusiasm by Forks & Hope Ensemble, “A Hero’s Journey” takes Joseph Campbell’s myth-based philosophy and follows its bliss down a slippery confessional slope that frequently disrupts the dramatic potential of this well-intentioned piece.

“A Hero’s Journey” is in need of characters to intervene between the actors and their mythological inspirations, to translate the formers’ frustrated desires into the epic aspirations of the latter. A greater investigation and interrogation of mythological theory would also enrich this piece: the fixed notions of good and evil, the deceptive ellipsis of “happily ever after,” the morality of morals. There are miles of subtext to dig into with characters as universally recognizable as King Arthur, Odysseus and Psyche. At sixty minutes, “A Hero’s Journey” has the space to go deeper.

It could also afford to be more concentrated as well. A few of these actors still need to discover more of themselves in their mythological inspirations and vice versa. In figures of such import to millennia of cultures from around the world, the ensemble would do well to invest the same kind of depth of meaning into their characters as they do into their own lives and experiences. As it is, the bonds here are thin and rely heavily on the kinds of reassuring principles that myths perpetuate and rely on.

Too often “A Hero’s Journey” feels like chicken soup for the sensitive soul. No doubt, these performances are sincere and occasionally moving but they regularly feel like a choreographed therapy session. The lack of integration into the themes of the piece makes for a tonally incoherent experience.

Forks & Hope at The Frontier, 1106 West Thorndale, forksandhopeensemble.com, $15. Through August 21.