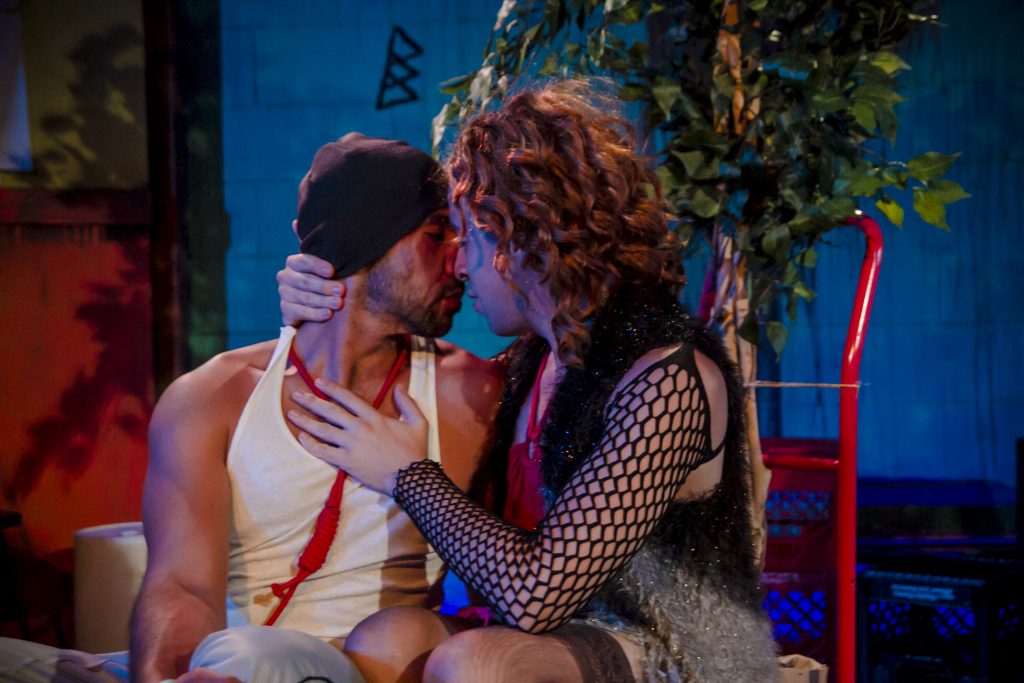 “It’s not supposed to be easy,” says one god to another at the beginning of “The Good Person of Szechwan.” With their contemporary take on Brecht’s parable play, Cor Theatre searches for resonances within the landscape of urban America, a country in the midst of a long, long love affair with the easy.

Under Ernie Nolan’s direction, “Good Person” is infused with a soundtrack spanning from boom bap to drill and characters who spit verses between scenes. While the musical interludes functionally illustrate the internal and external struggles of the play, the AABB rhyming pattern and School of Rap intonation never completely coalesce with Brecht’s prose. Many of the actors seemed understandably uncomfortable within the rhyming demands of hip-hop, with the noteworthy exception of Jos N. Banks and Dawn Bless whose flows were confident and polished.

“Good Person” is well in keeping with the tone that’s been set by this young company, which is ready, willing and able to turn expectations on their head. And when “Good Person” is good, it is quite good indeed. As the forcibly schizoid Shen Te/Shui Ta, Will Von Vogt is alternatingly vulnerable and commanding. He has all the charisma needed to lead this production and he gets reliable support from his fellow castmates who are energetic as an adlibbing ensemble though occasionally problematic as individuals.

This production’s Gotham-esque backdrop allows Nolan and his racially and ethnically diverse cast to employ a variety of dialects/accents to mostly fitting ends. Lea Pascal’s New Jersey housewife whine is as perfect as her purple velour tracksuit and Jeri Marshall’s Jamaican sass never once slips into caricature. Gender is also admirably fluid here with several actors switching between female and male roles as effortlessly as dawning a boa or a business suit.

However some characters raise eyebrows, in particular Aida Delaz’s Latino carpenter. There is nothing about Delaz’ character (who is dressed more like a gangster than a carpenter) that implies that they are Latino. Her performance, which is quite strong and fully committed, ends up feeling like an enthusiastic misstep in a production that otherwise successfully balances artistic risks with cultural sensitivity. (Kevin Greene)