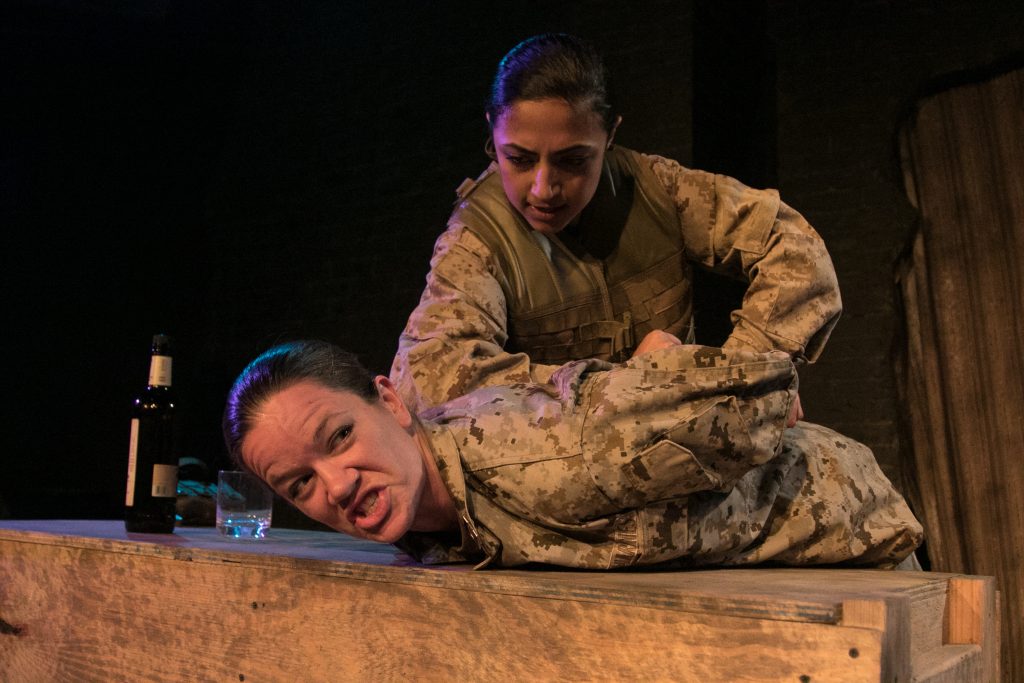 The grunts stand at attention as the officer paces before them hurling a hurricane of invective like any good officer does: calling them cunts and wookies, beating them harder than they’ve learned to beat each other. It’s the United States Marine Corps, baby—motivated, dedicated, Semper Fi! “Why are you here? Do you think you’re too good for women’s work? Too good to spread ’em like a bitch in heat?” she sneers at her four novices, two white, one Puerto Rican, one Arab, all aiming to be among the first women to pass the Marine Infantry Officer Course in Dustin Spence’s devastating new play, “The Promise of a Rose Garden,” directed by Elyse Dawson for Babes with Blades.

In both mind and body, these women are the hardest of the hard. They show it in their casual brutality toward each other. They show it in their delight in the fight: fists flying, elbows slamming with boots to heads and impassivity toward any wounds including their own. “My arm is crispy!” yells Ferguson (Sam Long) after a fire error. No matter. The girls complete their course in record time because they are exactly what they want to be: killing machines.

The eye of the storm is not the story of their feminist triumph in unusual circumstances but the malaise of a system built on masculine notions of dominance. It’s those who stand nearest the top who know that there’s no heaven above and nothing below but a hell of bodies driven by fanatic ambition to reach an invisible summit, past which lies only their demise. “Whoever desires glory, the glory belongs entirely to God,” says Sharif (a fiery-eyed Arti Ishak), the Ivy League-educated immigrant rebelling to pursue something so exceptional that the odds of achieving it are a death’s breath from impossible. She alone confronts Rockford (stunning Maureen Yasko), a woman officer and war hero, whose traumas on the field are rearticulated in the chaos of her personal life and the cruelties only a woman given power, in an order created by men to oppress them, can enact upon her own self.

“It is not cruel or unusual—we earned this,” they say at the beginning. And also at the end. (Irene Hsiao)