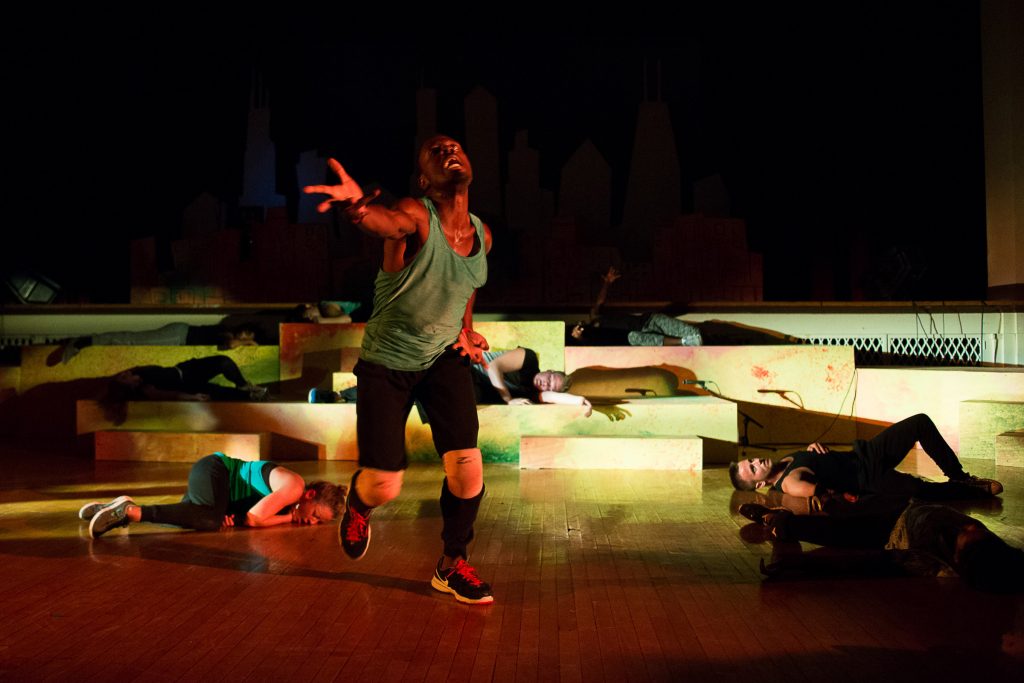 The Ensemble of “Skip to The End” at Collaboraction’s “Peacebook”/Photo: Joel Maisonet

As rain poured down outside, people of all ages and backgrounds packed inside a field house outfitted with stadium riser seats. They gathered around a stage to watch a series of performances focused on peace—how we get it and how it gets lost. At each of the three sites of Collaboraction’s “Peacebook” a total of seven different world-premiere dance, music and theater pieces are performed in the format of the company’s well-known Sketchbook Festival.

Two of the most memorable performances of the show’s opening in Hamilton Park were “Before the Pop Pop Pop” and “Skip to the End.”

Written by Steven Sapp and Mildred Ruiz-Sapp, “Before the Pop Pop Pop” is a powerful, poignant piece that tackles the shooting of a black boy from the perspectives of a neighborhood witness and a police officer. Directed by Cheryl Lynn Bruce, the piece reflects the confusion and heartache of a bystander as she struggles to cope with the loss of the child and the officer who tries to justify the boy’s death.

“Skip to the End,” choreographed by Kacie Smith, is a physically and emotionally intensive dance that centers on inner wars raging, cycles repeating and bodies burning out until a breath is taken and perspective is changed.

Collaboraction’s “Peacebook” isn’t just about presenting new works by some of the city’s best and most promising artists. It is about community involvement and engagement in answering one of Chicago’s most pressing questions: How do we become a more peaceful city? Collaboraction’s answer: through art with a message, community partnerships and an open mind—even in the heat of summer. (Mary Kroeck)

Peacebook begins with a community meal and peace fair with panels and tabling from organizations like Ann and Robert H. Lurie Children’s Hospital and the Illinois Department of Public Health. Arrive early to take part.