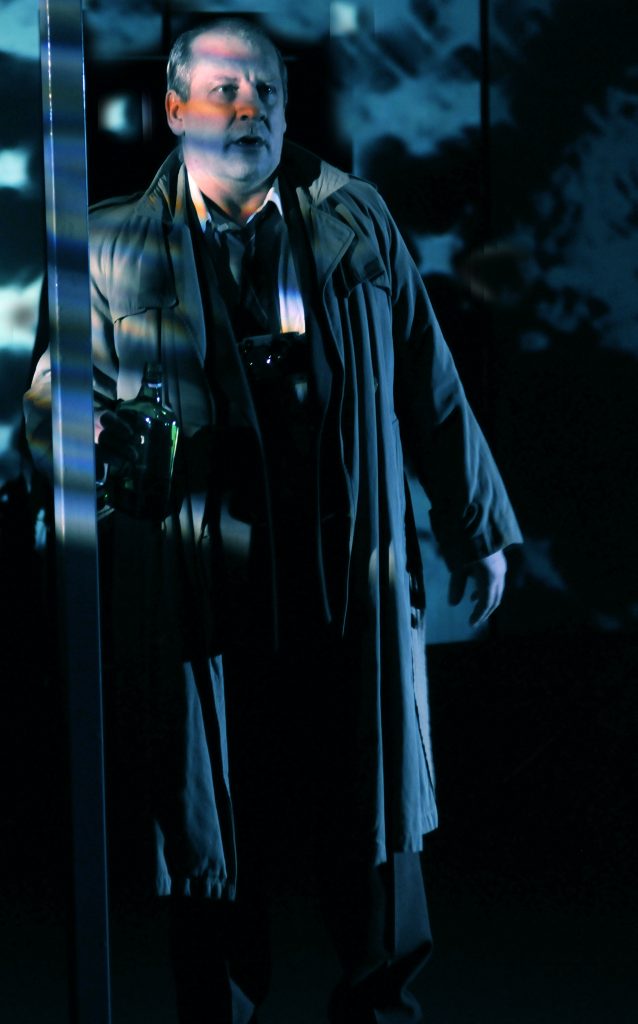 After Douglas Post wrote “Bloodshot” as a commission for Simon Slater, he learned about what extra support the playwright must carry for the performer.

“It is a high wire act for the solo performer and there is no one there to catch that person if they fall,” says Post. “The actor is entirely reliant on himself and this is what makes the experience so exhilarating.”

With harmony befitting an angelic choir, Post’s ingenious writing and Slater’s exhilarating performance left spectators starstruck at the magnitude of this solo thriller.

“Bloodshot” is a murder mystery that tells the story of Derek Eveleigh (Slater), a photographer in 1957 London who has been hired to photograph a West Indian woman. After finding her dead and seeing little involvement from the police, he begins an infatuated investigation about her life and death, interrogating an Irish comic, an American saxophonist and a Russian club owner/magician.

In crafting this play for Slater, Post showcased the performer’s many talents: acting, singing, magic and musicianship with multiple instruments. But in creating Derek as a character, he drew on the words of French photographer Willy Ronis who, when asked to describe his craft, said, “We do not see what is ‘real.’ We see what we are.”

“‘Bloodshot’ is about a man who finds himself inside his photographs,” says Post. “A man who falls deeply and dangerously in love with an image of his own making and so discovers what we are and who, specifically, he is.”

Slater’s multi-faceted performance, his movement from comedy to tragedy to romance and back again is seamless. In many performances, the audience is aware that there is an actor before them but Slater’s delivery could not have exhibited more of a flawless, world-sucked-in effect. How someone can go from being a Russian to an Englishman in seconds flat is a mystery in itself. Slater tells Post’s calculated tale with expertise and care unlikely to be replicated by another performer. (Danielle Levsky)