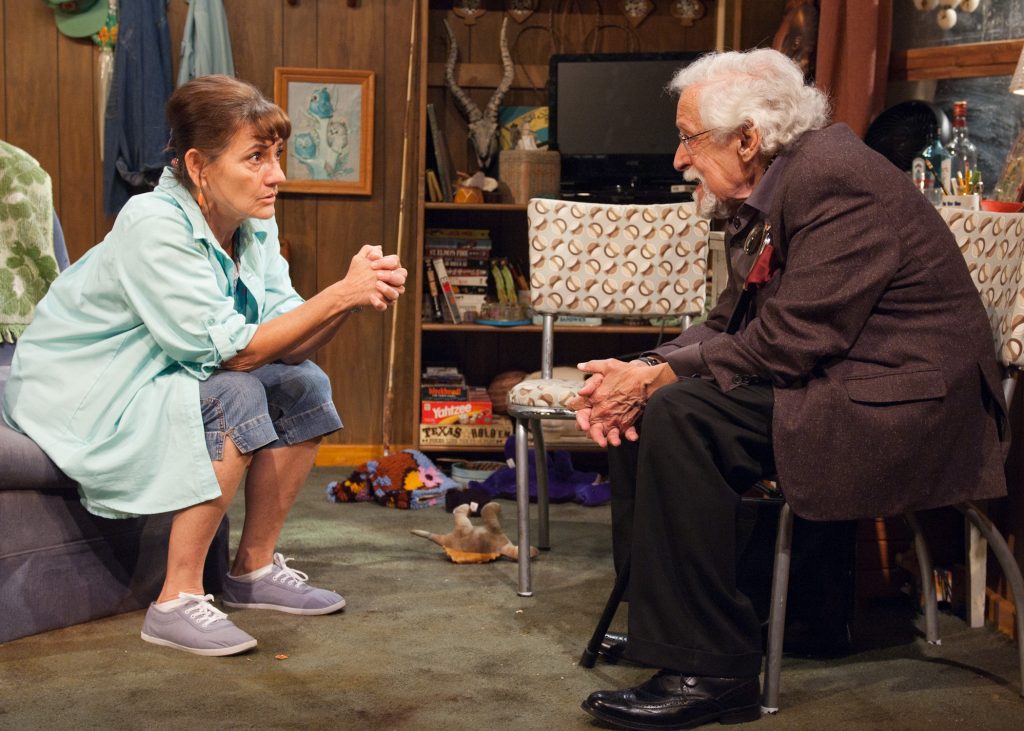 Stephen Sachs’ “Bakersfield Mist” hits close to home. A play about authenticity and personal meaning in art, it also probes the subject of opinion making and asks: Who are the curators of the narratives that shape our culture? And while there is much to be said about the democratizing effects of the internet (how did we ever decide where to get takeout from before Yelp?), we humans have a natural tendency to default to the opinions of experts, even when, as Sachs’ play suggests, their views run counter to our own instincts.

“Bakersfield Mist” concerns the true story of Teri Horton, a retired truck driver who purchased a painting at a thrift shop only to later discover that it might be a work by the painter Jackson Pollock. Sachs’ fictionalized account is a two-hander that occasionally drifts out of focus. Here, Horton’s fictional counterpart, Maude Gutman (Janet Ulrich Brooks), is pitted against the snooty Lionel Percy (Mike Nussbaum), who is the overtly pretentious and condescending yin to Gutman’s trash-talking, trailer-park-living, day-drinking yang.

While Nussbaum spends the first twenty minutes or so edging on parody, Brooks retains Maude’s humanity throughout the play, even as she rattles off multiple iterations of “No fuckin’ shit” in the way most of us might say “No way!” or “Excuse me?” The give and take here is simple enough: Maude wants Lionel to authenticate the painting. He refuses on the basis of his expertise and intuition. Gutman, it turns out, is a preternatural interlocutor (perhaps due to all the “Law and Order” she watches) and regularly disarms Percy with tactics that border on, before crossing over into, expert emotional manipulation.

All art benefits from the context in which it is presented. No doubt, “Bakersfield Mist” benefits from TimeLine’s well-deserved reputation. And yet, as Maude’s potential Pollock demonstrates, context alone does not define value. Like any good work of art, there is plenty to admire about “Bakersfield Mist.” Yet, it did not move me. And if there is a takeaway from “Bakersfield Mist” it is that being moved is the only thing that truly matters. (Kevin Greene)