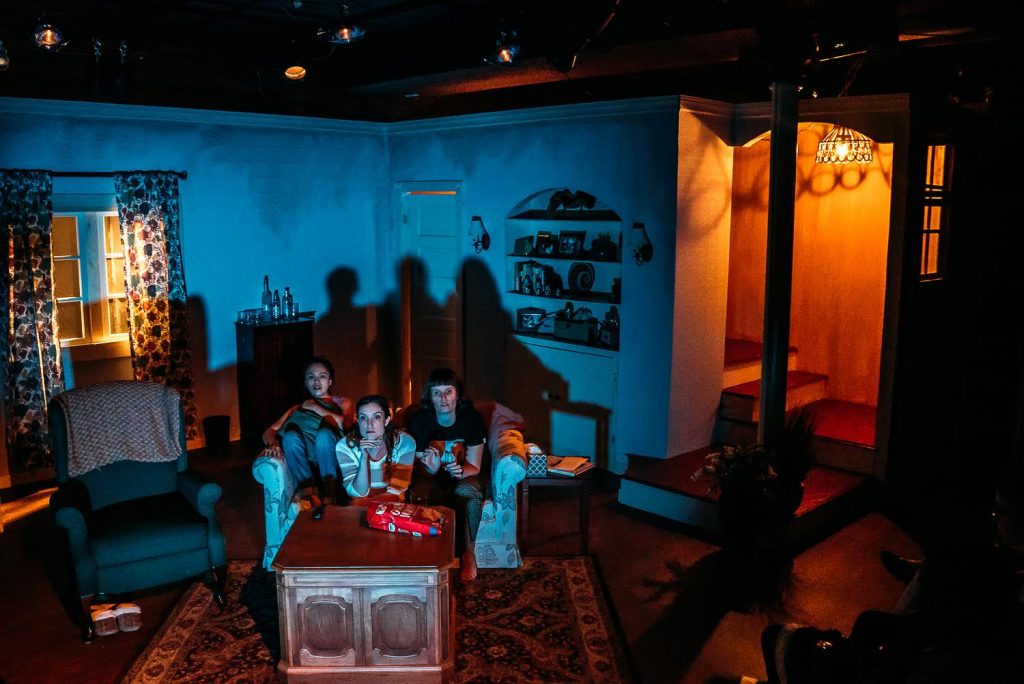 Colette Freedman’s “Sister Cities” is surreal. It’s like watching a Lifetime movie in an alternate reality. At the core of the show, four estranged sisters meet up after their mother’s (alleged) suicide and each sister is as different as the place she was named after: Baltimore (Norma Chacon), Dallas (Anna Donnell), Austin (Nicole Fabbri) and Carolina (Katlynn Yost).

At the top, this is a straightforward family drama. The four sisters are all at odds with each other, picking old wounds and maintaining the distance between them, each one dodging responsibility for their mother’s loneliness. Vodka lubricates all conversation.

But then reveals begin: Austin shares two bad turns about their mother (the latter being far more horrifying). Carolina’s happy marriage isn’t all that it should’ve been. Baltimore’s dropped out of school and joined the Peace Corps.

Then Austin completely alters the landscape with a single action.

This event, which takes place at the halfway mark, is a pivoting point, turning this play into two distinctive reads: either this is a family where drastic measures are relatively normal and thus minimize the damage of all actions within the play or the choice that Austin makes is as psychotic as it seems and must be treated as such by the others.

There is an inconsistency between script and performance in “Sister Cities.” The guard that all actors hold up keeps us at arm’s length. From the beginning, the shield is up. It affects an irregular tempo, it perpetuates the same emotional arcs from scene to scene. Even in a script that feels like a very dark episode of “Full House,” there’s a sense of reduction to the characters: the unseen aspects are untouched in performance.

“Sister Cities” really suffers from a lack of purpose. That love triumphs is a significant sentiment, one that we all need these days. But love never seems to be a motivator. Repressing emotional discoveries is also a valid topic of conversation, one that “Sister Cities” might have more readily explored over the redemptive power of love. (Jay Van Ort)