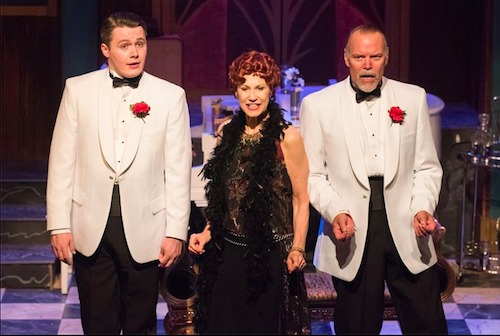 British playwright, composer and actor Noël Coward was politically incorrect—in a worldly, thoroughly witty way. He didn’t pound away at the powerless, he skewered the self-satisfied, the silly and the stupid among the powerful and the mainstream alike. He was a sassy cynic and somewhat of a snob, but his stories and songs were engaging, insightful and fiercely funny. In one popular song, going after the “ugly American,” Coward asked: “Why do the wrong people travel and the right people stay back home? What explains this mass mania to leave Pennsylvania and clack around like flocks of geese demanding dry martinis on the isles of Greece?”

This exceptional artist merits a revival and Dead Writers Theatre Collective tries to come to the rescue with “Oh, Coward!” The show is a revue featuring three sophisticates—played by Michael Pacas, Ian Rigg and Joanna Riopelle—who perform some of Coward’s most famous songs in an intimate cabaret setting, often with drinks (barely) in hand.

In addition to “Why Do the Wrong People Travel (When the Right People Stay Back Home)?,” the numbers include “Mad Dogs and Englishmen (Go Out in the Noonday Sun),” the unexpectedly poignant “Mad About the Boy” and “Mrs. Worthington” (about a stage mom who doesn’t understand that her beloved child lacks only looks and talent). Howard Pfeiffer accompanies the singers on a gleaming, art deco-inspired white piano. His playing is so energetic, innovative and sublime that it would have soothed Coward, the creative savage beast, himself.

On opening night, Pfeiffer sometimes seemed to be playing alone. Pacas, Rigg and Riopelle weren’t living Coward’s lyrics; they seemed to be merely mouthing them, as if they were still early in the rehearsal process. At times, I found it difficult to hear them work Coward’s wordplay. I had to follow up by listening to some of the songs again online afterward.

Does this mean that “Oh, Coward!” isn’t worth seeing? Not at all. The show accomplishes a great feat by bringing even a watered-down version of this artist back into the public consciousness. Coward’s song work demonstrates that political incorrectness can be an art form and a relatively progressive one at that. (Michael Amedeo)