Olivia Lilley, former artistic director, The Runaways Lab Theatre
I am stoked to dive into (re)discover’s sprawling “Romeo & Juliet” interwoven with the dance drama dream of “The Legend of Tristan and Iseult.” The experience is entitled “Farewell My Friend” and unlike traditional Shakespeare productions, (re)discover welcomes audiences to veer from the beaten path. Chase Lady Capulet, Balthasar, Iseult or anyone else. Every character promises to be fleshed out fan-fiction style (including Rosaline). If you have friends who don’t get theater, this is the show that’ll make them (re)consider. If you’re a Shakespeare geek, this was made for you. Begins September 3 at (re)discover theatre.

Will Davis, artistic director, American Theater Company
“You On The Moors Now” by Jaclyn Backhaus, is a glorious mash up of nineteenth-century novelists Louisa May Alcott, Jane Austen and the Bronte sisters, set in the fictional world of “The Moors.” When our heroines are presented with marriage proposals they decide to escape, inciting a massive battle over whether they need those suitors at all. Jaclyn loves an epic, she’s not afraid to craft theatrical worlds that collide monumental jokes with touching human moments. Devon de Mayo’s direction of this piece is sure to be adventurous and heartfelt. I can’t wait! Begins September 9 at The Hypocrites.

Ike Holter, playwright, artistic curator of Theater on the Lake
Teatro Vista is a great company and the people who make up their ensemble are some of the best artists in Chicago, onstage and behind the table. They’re doing the world premiere of Mando Alvarado’s “Parachute Men.” Dude’s had his plays all over the country and it’s awesome we’re getting something hot off the presses. Looks like a great new comedy. Sweet small cast including Tommy Rivera Vega who’s got a great, smart new voice that we need more of here. Teatro Vista always does great work; Ricardo Gutierrez runs the joint and I’m so excited to sit in that audience and snack on some new stuff. Begins September 10 at Teatro Vista.

Jacob Harvey, artistic director, Greenhouse Theater Center
When “Hand To God” burst onto Broadway it reminded us that even in a climate of blockbuster movie adaptations and star-studded revivals, a small, innovative and often “subversive” play still has a place on the Great White Way. In Robert Askins’ savage story, Tyrone, a devilish sock puppet and creation of the young puppeteer Jason, forces us to come to terms with our own demons. Despite his mischief and malice, Tyrone helps Jason to understand his own place in the world as he grapples with concepts of religion, family, sex and self-destruction. The physical demands that require an actor to simultaneously inhabit the two characters is a feat of both grace and rigor, which I am certain that Alex Weisman will achieve with ease. Begins September 16 at Victory Gardens Theater. 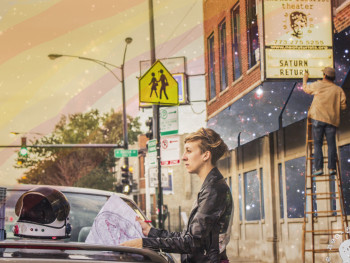 Amanda Dunne Acevedo and Lindsey Barlag Thornton, curators, HybridSalon
We happened to catch the culminating workshop performance of “Saturn Returns” created by Tif Harrison and performed by The Neo-Futurists at their micro-festival on art and performance. This piece is part “Too Much Light,” part performance art and intimately affecting. Whether the ensemble is making bold theatrical choices, telling heart-wrenching personal stories or waxing poetic about astrology, it left us talking and thinking about it for days afterwards. Begins October 13 at The Neo-Futurists.


Ireon Roach, The Yard company member
Poet playwright and activist Kristiana Rae Colón paints a community of spoken-word artists in the midst of messy politics in her U.S. premiere of “Octagon.” There is a poetry slam to be won and a champion team down a member with five poets battling for the slot. Love triangles (and yes, even octagons) arise behind the scenes when a strong female lead with “unbridled desires” is given pen, paper and, ultimately, voice. The play raises the question of whether the point of this slam is the points or the poetry. The audience is afforded a look into the dangers of a politically and emotionally charged community when accosted with the reality of artistic survival and integrity. Begins October 19 at Jackalope Theatre.

Laura Stratford, executive director, Underscore Theatre Company
I’m very, very excited for “I Am My Own Wife.” When I was a sophomore in college I interned at an LGBTQ theater in Boston and this show was just beginning to hit the scene. I remember being fascinated by Charlotte von Mahlsdorf’s story. About Face’s production will be the first to star an actual transwoman, Delia Kropp. With children being kept from bathrooms in their own schools because of their biological sex and with the authoritarian undertones rising in American politics right now, I can’t imagine a more important or timely production. Begins November 4 at About Face Theatre.

Hutch Pimentel, artistic director, First Floor Theater
Maybe it’s the theater geek in me, but I am seriously excited about “King Charles III,” an “imaginary future history” play written in verse. This play isn’t content to just sit back and revel in its linguistic accomplishments either. It’s a thriller through and through, like a bureaucratic “Game of Thrones.” Less swords and sex, more schemes and specters. Begins November 5 at Chicago Shakespeare Theater.