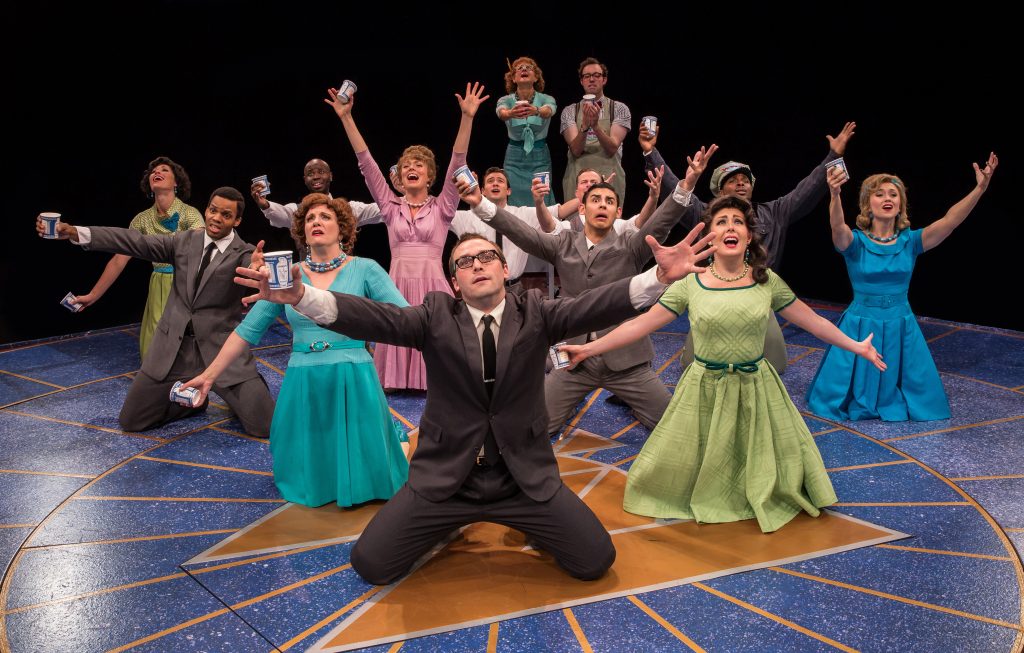 The cast of “How to Succeed in Business Without Really Trying”/Photo: Liz Lauren

The musical “How To Succeed in Business Without Really Trying” and television’s “The Dick Van Dyke Show” both premiered in October 1961. If their barely perceptible plotlines made gentle elbow nudges at the changing mores of the time (the upwardly mobile American middle class challenging the political, financial and sexual precepts of their parents’ generation), the characters themselves, despite being tropes, never received the satirical wink. In 2016, it is no small feat to produce a successful retelling of a 1960s story that lampooned the 1950s. How to balance the nudging and the winking to keep the story rolling while still allowing the audience to fall in love with the characters?

In Marriott’s production, the sometimes schlepping, always charming hero J. Pierrepont Finch is played to great effect by Ari Butler, a twinkling song-and-dance fellow who out-Dickies Van Dyke himself. A virtually untried Mary Tyler Moore launched a career with her portrayal of Van Dyke’s wife, Laura Petrie, on the fabled television show. As Rosemary, Jessica Naimy slips her dainty foot into Laura’s Cinderella pumps, trailing her success-driven man, supportive yet quietly wailing for more attention, complete with bubbly voice, great gams and the thickest brunette hair on either stage or screen. If Sally Rogers’ Rose Marie shared the musical’s ingénue moniker “the best gal pal who never has a date,” Smitty (Marya Grandy) is her doppelganger, all the way to the pencils sticking out of her office-appropriate updo.

The matching types are trotted out again and again, and every performer in this production answers the song and dance specialties of the 1960s. Terry Hamilton, Alex Goodrich and Derek Hasenstab are especially enjoyable as office tycoons and wannabes. If the production steers dangerously close to the double-parody line it is with the luminous Angela Ingersoll’s overly sexed, overly dumb Hedy La Rue, who might have been played as beautiful and vacant, rather than whorish and kindergarten-graduated.

But Marriott keeps the parody situational and lets the characters warm our hearts. Remember the small screen? Remember the double-takes and the then-appropriate-now-unforgivable sexual double entendres? Take a dance down memory lane. (Aaron Hunt)