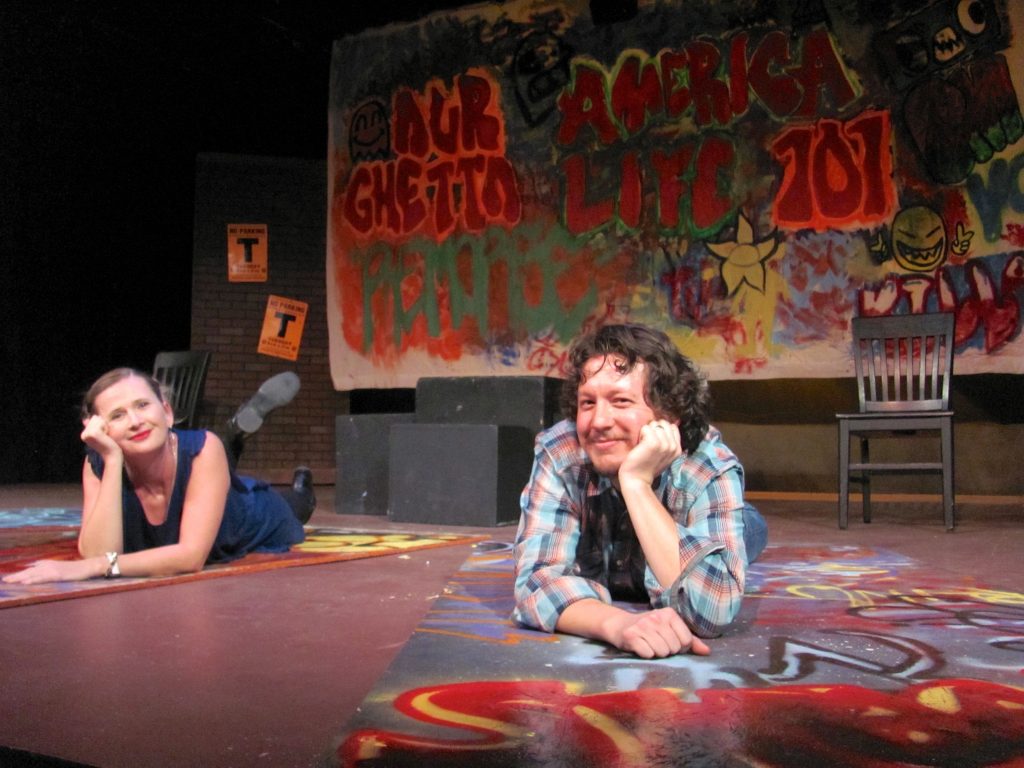 The Yard co-founders Mechelle Moe and Joel Ewing on the set of “Our America: Ghetto Life 101”

My dad teaches music at the middle school in my hometown. Every year, just after school wraps up, he launches into his summer project. Sometimes the results of these projects would be small, almost invisible. Other times they would be undertakings so massive that the rest of the family would be required to evacuate the house while dad, for instance, remodels the entire kitchen. After a full year of classes, concerts and meetings you’d think he’d just want to relax.

For some people (educators in particular it would seem), idle hands are simply not an option. Two such folks are Joel Ewing and Mechelle Moe, co-founders and artistic directors of The Yard. It’s been a busy year: On top of their regular artistic workload (Ewing is an actor, Moe a director), The Yard, the theater collective based out of Nicholas Senn High School where Ewing is the lead theater teacher and Moe is a teaching artist, recently completed its inaugural season, which included three productions as well as a remount at Theater on the Lake.

Technically the off-season for teachers, Ewing and Moe still managed to stay plenty busy this summer. Ewing was in Colorado working with the Rocky Mountain Regional Theatre’s youth program while Moe split her time between teaching at Lookingglass and directing a reading of Sarah Ruhl’s “In the Next Room” for the Chicago Inclusion Project. What sparse spare time they did have was dedicated to thinking about and planning the next stage of The Yard’s development.

“We were in a uniquely fortunate position season one where we lined up everything right off the bat,” Ewing tells me via Skype. “Now there has been tremendous response and a lot of eager requests to form an alliance which has been really exciting.”

This concept of alliances is unique to The Yard. While Senn, which is an arts high school, serves as a physical and emotional home base, each productions helmed by The Yard partners with a local theater company who in turn offers resources, support and performance space. For season one, The Yard worked with The Hypocrites, Raven Theatre and Jackalope Theatre as well as with the Steppenwolf Young Adult Council (SYA) for a staged reading at Steppenwolf’s LookOut series. With each production, Moe and Ewing examined how to match the aesthetics and values of their young company with those they were paired with.

“What’s been great about each alliance is that we’ve gotten so much from their infrastructure and their resources,” says Ewing. “Conversely I think The Yard brings a certain kind of energy, passion, curiosity and new audience members that might not have otherwise been there.”

Being in attendance for a Yard production, the difference is clear. Not only are their audiences ethnically and racially diverse (a direct result of the diversity of their company, which is itself a byproduct of Chicago Public Schools) but there is also a broad range of ages present as well.

In a time when inclusion and representation are at the forefront of conversations surrounding art, Ewing and Moe feel strongly that in addition to race, gender and sexuality, age needs to be a part of these discussions as well. Historically, high-school students have been rather limited in terms of what kinds of plays they get to do (and, by extension, what roles they get to play). And while Thornton Wilder’s “Our Town” deals with adolescence and mortality, so does Lauren Gunderson’s “I & You,” the demanding two-hander that The Yard produced in partnership with Jackalope.

And that’s only scratching the surface: With Raven Theatre, The Yard took on Kirsten Greenidge’s “Milk Like Sugar,” a story about a pregnancy pact between a group of inner city teen girls. Their season began with Sean Graney’s “The 4th Graders Present an Unnamed Love-Suicide,” a play as emotionally wrenching as it is linguistically challenging. Their co-production with SYA, “Eclipsed,” showcased their interpretation of playwright Danai Gurira’s drama about the second Liberian Civil War, a play that was recently produced on Broadway. That version starred Lupita Nyong’o, who is thirty-three. In The Yard and SYA’s production, the oldest actor on stage was a senior in high school.

In each of these productions, Moe and Ewing sought to represent teens as they truly are.

“A lot of people shy away or don’t think that kids are emotionally capable of handling this material,” says Moe. “We found that really frustrating. Here’s all these amazing plays being done by adults performing as fifteen-year-olds when we have fifteen-year-olds living some of these stories. And the authenticity of hearing that voice tell that story really makes a play sing.”

The stated mission of The Yard is to make theater about, driven by and relevant to young people. Yet this doesn’t preclude a profound affect on the adults involved.

“I no longer look at it like I’m just working at this high school. These young artists are my peers,” says Moe. “And for us, I put as much into these productions as I do with any other company I work with in town. To me, this is just like a professional company and these young artists need to be recognized as professionals versus these really talented high school kids.”

“Yard shows give an opportunity for young people to express their complexities,” adds Ewing. “The art defies this perception that young people are disinterested and apathetic and not connected and ill informed. And that is just simply not the case.”

If there is one takeaway from witnessing the ongoing development of The Yard it is the paramount importance of arts funding in public schools.

“Just giving kids access to art, whatever that discipline is, can be and is transformative to the rest of their life,” says Moe.

And while art may not be accessible to all the kids in Chicago who really need it, Ewing and Moe are determined to bring The Yard to as many of them as possible.

“What I really love is seeing young people be like ‘Oh my god! This is a thing that exists!’ Or ‘I don’t have anything like this at my school,'” says Ewing, beaming. “We just want to let more young people know that something like this exists and if they want to, they too can be a part of it.”