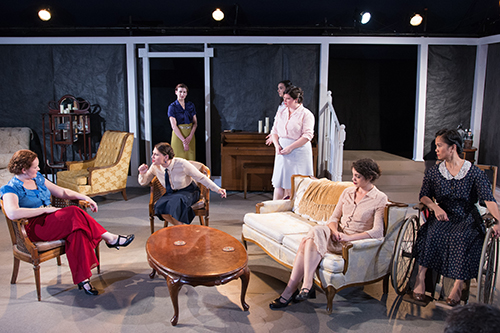 For years, women were held back from receiving an education. In some parts of the world, this is still the case. In 1935, being an educated working woman was taboo and came at a cost. It was often met with hostility and could drive one to the point of feeling crazy.

These are some of the issues presented in Maria Irene Fornés’ “Fefu and Her Friends” at Halcyon Theatre.

The play is often lauded for its all-female cast and its unique staging—acts one and three take place in front of a collective audience while act two takes place in four parts with the audience moving in four groups, rotating to each scene. It is a daring theatrical move and one that can cause a show to fall flat if not well executed.

Here, under the direction of Tony Adams, the scene-to-scene walkabout is distracting. While watching one scene, the audience can see or hear what’s happening in the other rooms. Though this adds to the collective madness of the show, the noise and visibility of two scenes at once makes it hard to find footing in an already complicated play.

Likewise, the overall tone of the show feels uneven: Be it the Life magazine used in one of the scenes, the off-timing of the scenes in act two (they never finished simultaneously) or the fact that the women are gathering in the strong-willed, gun-flinging, toilet-fixing Fefu’s home to prepare a presentation to fund public arts education. Yet, the themes of power, sexuality and conformity still resonate today, nearly forty years after the play’s debut. (Mary Kroeck)