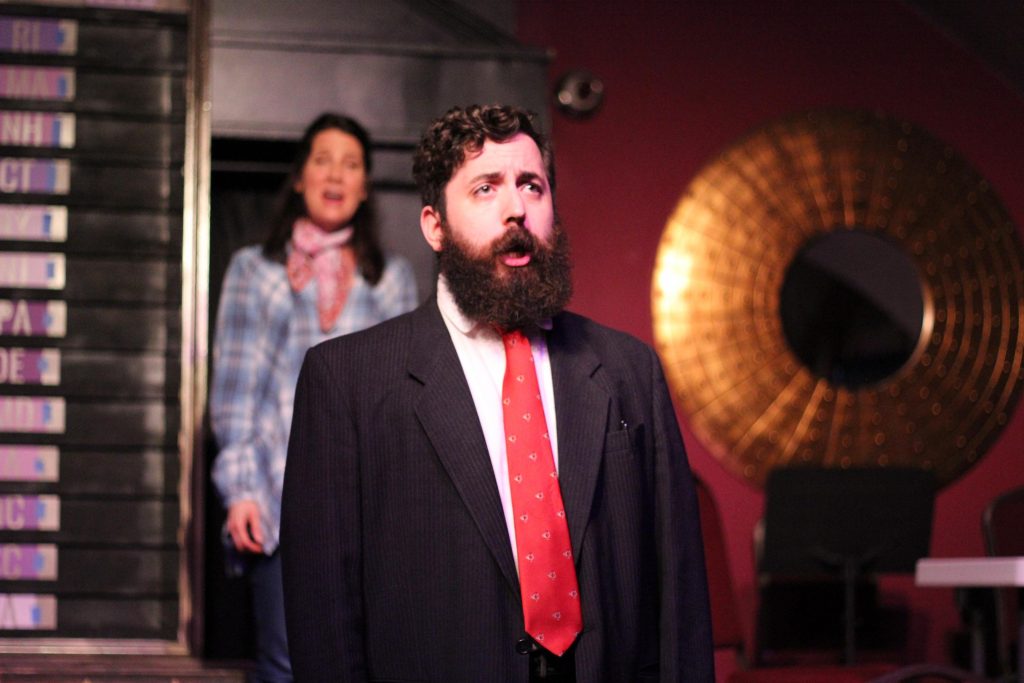 A dysfunctional government and an ambivalent attitude toward both change and authority are nothing new in American history, as demonstrated in E.D.G.E. Theatre’s revival of the 1969 Sherman Edwards-Peter Stone musical “1776.” “I have come to the conclusion that one useless man is called a disgrace, that two are called a law firm and that three or more become a Congress,” declares John Adams, who is trying to herd this fractious crowd toward a resolution of independence. Somehow all that uselessness translated into history but at a moral cost that this show bravely depicts.

Director Melissa Crabtree and musical director Linnea Carrera perform miracles of blocking and pacing in maneuvering the twenty-five-person cast around the tiny stage. But the cramped and intermission-free staging produces the desired effect of being trapped in a hot, crowded room that you cannot leave until a fateful collective decision is made. The leads—Terry McEnroe as the volatile John Adams, Jack Wright as the detached Thomas Jefferson and Edward Kuffert as the worldly Ben Franklin—fully inhabit their characters, humanizing without trivializing them. Adam Hoak excels as their opponent, the reconciliation-seeking John Dickinson, an honorable and intelligent conservative in a long-ago, pre-Fox News age.

For the most part, the songs have aged well. The best of the numbers—“Molasses to Rum,” about Northern complicity in the slave economy and “Cool, Cool, Considerate Men,” a minuet on the owning class’ tendency to move “ever to the right, never to the left”—ruffled feathers in their time. In fact, the latter song was cut from the 1972 film version at President Nixon’s personal request. It remains disturbingly relevant.

The production is not without issues, including modern-day costuming with a Goodwill touch and a couple of voices that prove less resolute than their characters’ patriotism. But as a whole, the show succeeds in revealing the courage as well as the compromises underlying independence. As the election nears, “1776” returns us to the process’ beginnings, back to a time when the American project meant confronting empire rather than consolidating it. “We’re about to brave the storm on a skiff made of paper,” says John Hancock at the end. Two-hundred-forty years later, the boat is still rocking. (Hugh Iglarsh)