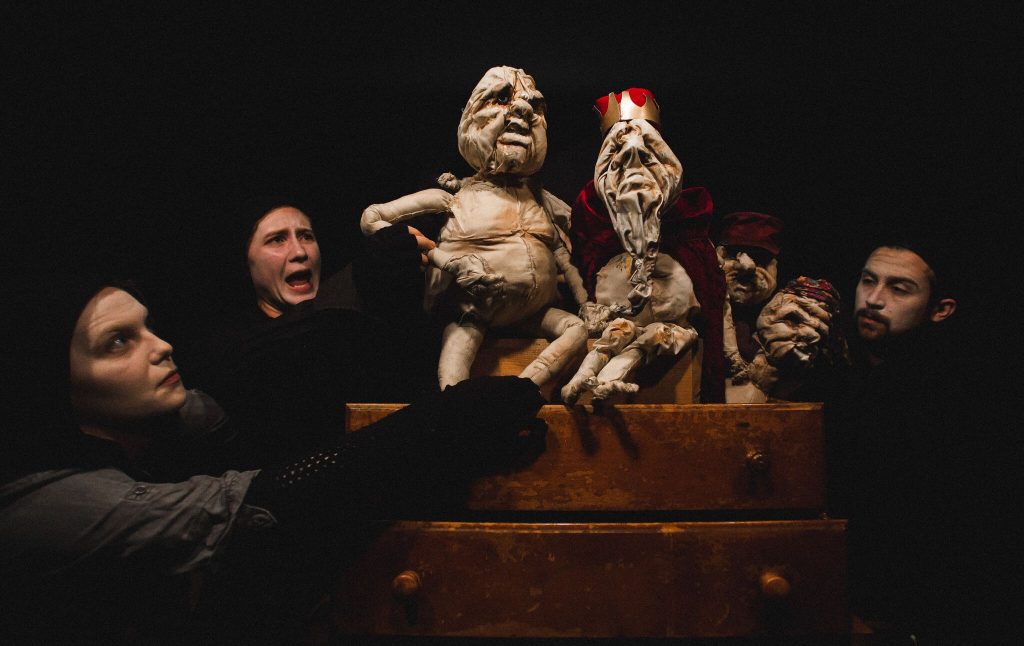 What must be said about Pa Ubu? He farts. He is simple. He is a childish, power-hungry coward. And his body count is higher than you imagine a bed-sheet puppet’s would be. But what about the shades standing behind Pa Ubu? Those who wield Ma Ubu and Pa Ubu, their rivals and their allies?

“Ubu the King” follows Pa Ubu’s rise to the top, his prowess (read: ineptitude) as financier, commander and king. Killing the present king and almost disposing of his son, Ubu’s ascension echoes Macbeth’s ambition though with less eloquence than the Scottish king. Here, there is butt-scratching and many “shittums.” Retold by Rough House Theater and designer Grace Needlman, “Ubu” may have found itself the perfect medium: a puppet play.

Brimmed with stuffing and bolt-eyes, “Ubu the King” is as much spectacle as social commentary and body jokes. In the center, power and manipulation; on the skin, hidden hands and phantom joints. Framed as such, the puppeteers become ghostly figures who struggle for control of the play as much as Pa Ubu struggles to remain in control. This provides a direct corollary: the analogy is set, these puppets are people and the people are puppets, all guided by mysterious ambitions and forces beyond their control.

Beyond that, there is a cautionary tale within the play about entitlement, oddly prescient given that we’ve been failing at governance for thousands of years: just because one has a title, has worldly wealth and arbitrary placement within a hierarchy, doesn’t mean they should be leading people. An obvious lesson, though: Donald Trump is running for president. Shittums.

With dozens of puppets in play, the cast of five puppeteers (David Gordezky, Charlotte Long, Claire Saxe, Sarah Stockdale and Nick Strauss) stay on the tips of their fingers and the tops of their games. When the energy is high, humor is high. When they slow down and show you how the joints crack, Pa and Ma become menacing shadows of what we really can be. (Jay Van Ort)