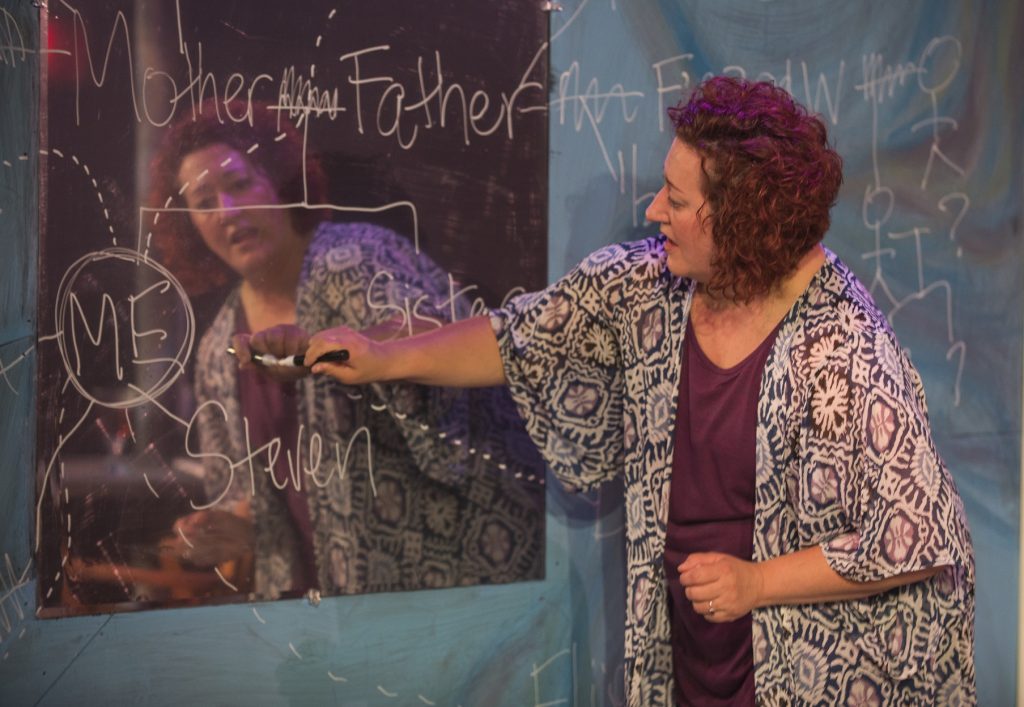 “I could marry you,” says the vivacious redhead up front to a member of the audience. “I’d like to marry you,” she says, looking at another. “I would marry you,” she says, addressing a third. No, she’s not a bachelorette or a serial bride, she’s ordained by the Church of Spiritual Humanism to join willing fools in holy matrimony. But she also happens to be a marriage junkie, obsessed with not only her own relationships but with those of her family, exes, acquaintances and religious figures. “I could marry my sister!” she announces. “We have known each other thirty-eight years… I love going to the dentist.” No, there are not really transitions in “I Do Today,” an eighty-minute monologue by Sarah Myers, delivered with confidence by Carin Silkaitis.

What holds the piece together is the writing board at stage right, a mirror in the center surrounded by an inexplicably paisley border, upon which the unnamed woman diagrams a messy family tree in white ink. She starts with a standard nucleus of father, mother, sister, before proceeding to include less-orthodox variables including “F’s 2nd W” (Father’s Second Wife), “FEH” (Future Ex-Husband) and Elijah (a noted Biblical figure as well as her imaginary friend).

But the central figure in the picture is the one whose face looks back out of the mirror, the one whose voice never falters delivering a narrative of arbitrary pairings, missed connections, nostalgic “might-coulds” and rhapsodies on the formerly glorious statures of divorcees and bisexuals: “ME,” written in caps, circled several times for emphasis.

Life is full of disappointments and unimportant tragedies, she explains. But after her peregrinations, she winds up married to a milquetoast named Steven—a straight white lawyer who tolerates her bemoaning the loss of her liberal feminist commitments with all the gallantry appropriate to a character who never has the slightest chance of proving his existence. So all’s well that ends well as long as you like happy endings.  (Irene Hsiao)