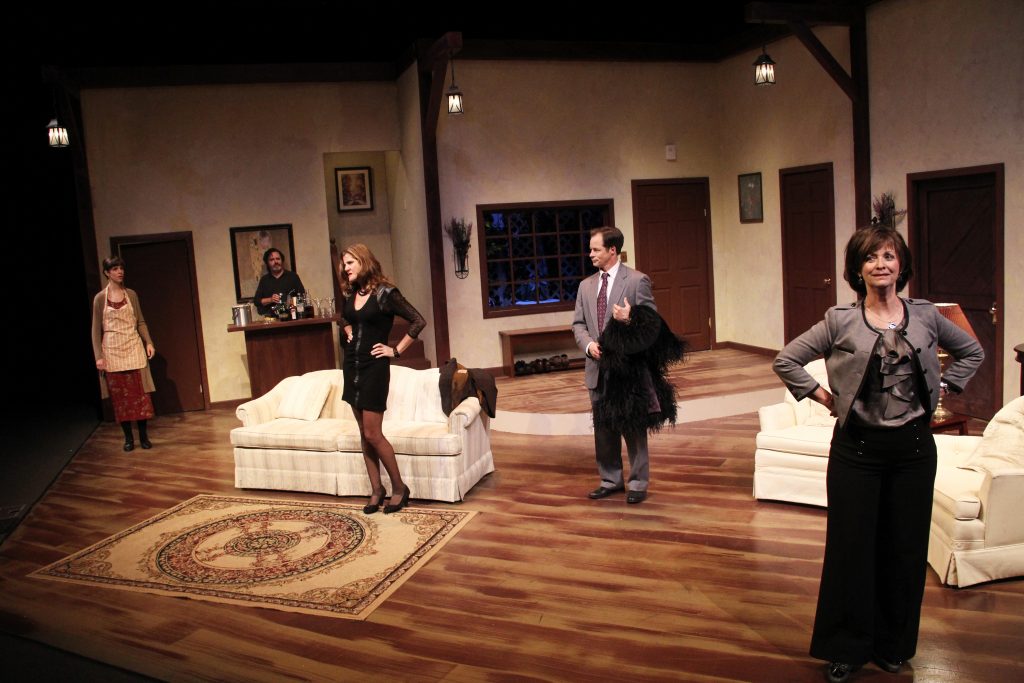 Buffalo Theatre Ensemble returns for its thirtieth anniversary season at the College of DuPage with Marc Camoletti’s well-honed farce “Don’t Dress for Dinner.” Originally formed as a professional Actors’ Equity Association ensemble company supported by the college and serving as a student training ground, the college and the company separated three years ago. BTE returns as a non-profit theater, sustained in part by the college for a two-year period of reorganization while continuing to be a resource for the college’s theater students.

Camoletti, best known for his play “Boeing-Boeing,” scored another international hit with “Don’t Dress for Dinner.” This play begins with a philandering husband, his philandering wife and the husband’s friend. Did I mention that the wife and the friend are having an affair? Then the playwright tosses in the husband’s paramour and hands the entire soufflé to a cook. The cook is persuaded to assume various roles, from girlfriend to niece, depending upon who is in the room. Did I mention that her murderous husband is on his way to pick her up?

McAninch Center’s theater spaces are a too-little-known asset to the greater Chicago area. If the outside appears antiseptic, the theaters themselves are state-of-the-art. “Don’t Dress for Dinner” plays in the smaller Playhouse Theatre and director Kurt Naebig quite rightly plays the show downstage at the audience’s feet. Scenic designer Michael W. Moon’s set is thrifty but suitable and lighting designer Jon Gantt creates just the right murky glow for subterfuge. Kimberly G. Morris’ costumes show everyone to their best advantage.

There isn’t a weak link in the cast with Brad Walker, Robert Jordan Bailey and BTE artistic director Connie Canaday Howard setting the stage as the husband, friend and wife respectively. Laura Leonardo Ownby is an elegantly confused girlfriend and Nick DuFloth is frightening and funny in equal parts. In the plumb role of the cook, Rebecca Cox is a constant delight, milking every moment with easy insouciance.

With a terrific facility and a first rate ensemble to play in it, BTE returns as a theatrical gourmand. (Aaron Hunt)