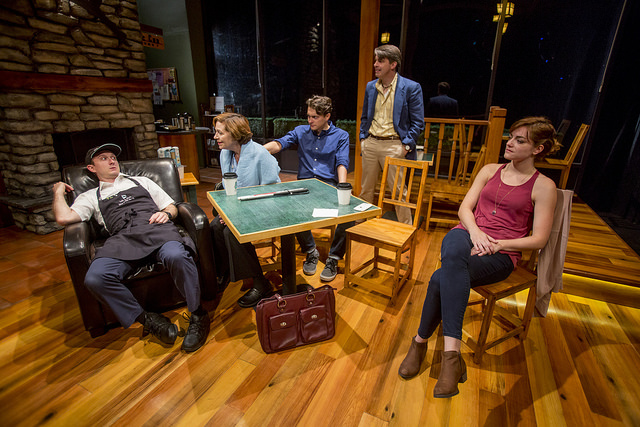 “Seinfeld” has long been referred to as “the show about nothing.” Though something of a misnomer (co-creators Jerry Seinfeld and Larry David have both expressed confusion regarding the public’s enthusiasm for the description), after the huggy-feely sitcoms of the 1980s viewers gravitated toward a show whose agenda didn’t extend beyond entertainment. With “Naperville,” playwright Mat Smart has written the theatrical equivalent of “the show about nothing.” Unfortunately, where “Seinfeld” threw out the book, “Naperville” clings to it desperately, treating with sympathy and exaggerated gravitas the neuroses of suburbanites and, by extension, White America.

The real question to ask about “Naperville” is: Why? A play about an affluent, predominantly white suburb populated with self-pitying denizens whose preoccupations include podcasts and lattes, this “Naperville” is more than just thirty-five miles from Chicago. It is in another reality altogether.

To his credit, Smart does seem to be writing to his personal experience and doesn’t feel the need to tack on social issues unnecessarily (beyond the generalized evil of corporate culture) or speak on behalf of other groups. Unfortunately, “Naperville” coasts along the surface of sentimentality. The play’s most dramatic lines have a certain New Age hollowness to them. “The opposite of faith is certainty,” claims the tortured believer. “You’re just a voice to me,” says the recently-blind mother to her son’s (very) new love interest.

It’s not that these lines, or Smart’s play in general, lack sincerity. Just the opposite. Smart loves his characters too much. Like an overprotective father, he shields them from harm. In doing so, they come across like basic nouns to which an endless string of adjectives have been attached with no verbs in sight.

The cast does their best with the play’s tonal inconsistencies which pit the near-absurdity of Andrew Jessop’s relentlessly cheery, serially depressed barista and Charlie Strater’s manically enthusiastic preacher against Abby Pierce’s barely-holding-it-together divorcee, Laura T. Fisher’s impossible-to-please mother and Mike Tepeli’s overprotective mama’s boy. While Strater and Jessop generally get the bigger laughs, Smart’s romcom fixation means we spend a lot of time with Pierce and Tepeli who are burdened with the task of portraying a ready-for-Hollywood meet cute on the floor of a public restroom.

With its coffee shop setting and overbearing whiteness, “Naperville” may remind you of that other staple of nineties television: “Friends.” (Kevin Greene)