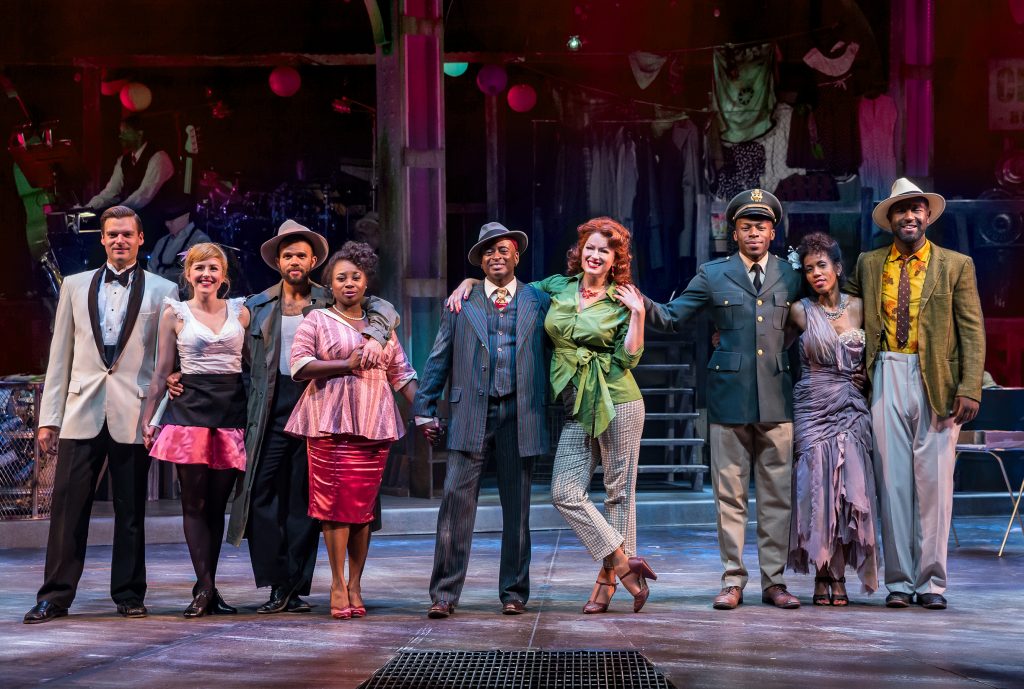 Jerry Leiber and Mike Stoller wrote songs as classic as they come. From “Jailhouse Rock” to “Stand By Me” and many others, these songs are revisited in “Smokey Joe’s Cafe” at Drury Lane Theatre.

This musical revue has a limited storyline pieced together by Tony Award-nominee Marcia Milgrom Dodge, who cleverly sets the show along Chicago’s Maxwell Street to give it a more local feel.

In order to make connections that wouldn’t otherwise exist, Dodge gives names to the characters who sing these songs. At best, these connections play out like little vignettes. It’s almost like watching live music videos where a story is encapsulated in the three-to-five minutes of a number. However it doesn’t really stretch beyond that.

The ensemble cast, consisting of Justin Keyes (as Little Walter—presumably a nod to Marion Walter Jacobs, the only harmonica player to be inducted into the Rock and Roll Hall of Fame), Carrie Abernathy, Sean Blake, Meghan Murphy, Amy Orman, Will Skrip and Tyrone L. Robinson, is vocally strong. They keep the beat going throughout the thirty-nine numbers showcased. Chris Sams and Donica Lynn (as Willie Mae, an apparent nod to Willie Mae “Big Mama” Thornton, who was the first to record the song “Hound Dog”) are especially outstanding. Lynn’s rendition of “Hound Dog” certainly does Big Mama justice.

The show lets the music tell the story (or stories as the case may be) and presents a soundtrack to 1950s U.S.A. If the opening-night crowds were any indication, audiences, especially those in search of nostalgia, are sure to enjoy their time in this little fictional neighborhood. (Mary Kroeck)