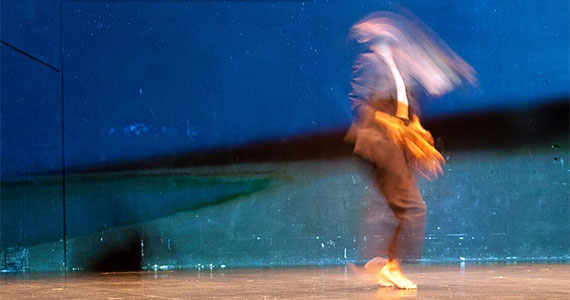 Last year, butoh master Tadashi Endo gently guided a small audience at the Old Town School of Folk Music on a journey through the pain, fear, tenderness and strange beauty of the subconscious in his one-man “Requiem for Pina Bausch.” Alone on the floor with a hanging sheet of metal, clad through the first half of the show in a long, thin-strapped, white sheath dress as was iconic of Bausch, Endo’s ode to the genius choreographer (and his former acquaintance) both honored the individual while expanding out into the universal divine. Endo returns this year to a larger Chicago stage, performing “Fukushima Mon Amour” at the Dance Center of Columbia College on September 17. “Mon Amour,” also a solo project, is another requiem of sorts, its subject the 2013 tsunami and subsequent nuclear reactor meltdown. Endo points to cultural identity ties between this recent tragedy and atomic bombs dropped on Hiroshima and Nagasaki. Butoh developed in the aftermath of World War II—absurdity and grotesquerie two of its hallmarks—and the choice of subjects creates an interesting frame for the art form. He posts the following verse above the ticket info on the Dance Center site:

Japan is a beautiful country. Japan is a fascinating country full of myths.
Japan is the only country that witnessed the atom bomb.
The catastrophe caused lots of terror and grief.
Grief created solidarity that turned people
into the extreme and sensitive Japanese that we know today.

In addition to the single evening performance, Endo will teach a four-day series of button workshops, open to all, at Outerspace studio in Wicker Park. (Sharon Hoyer)