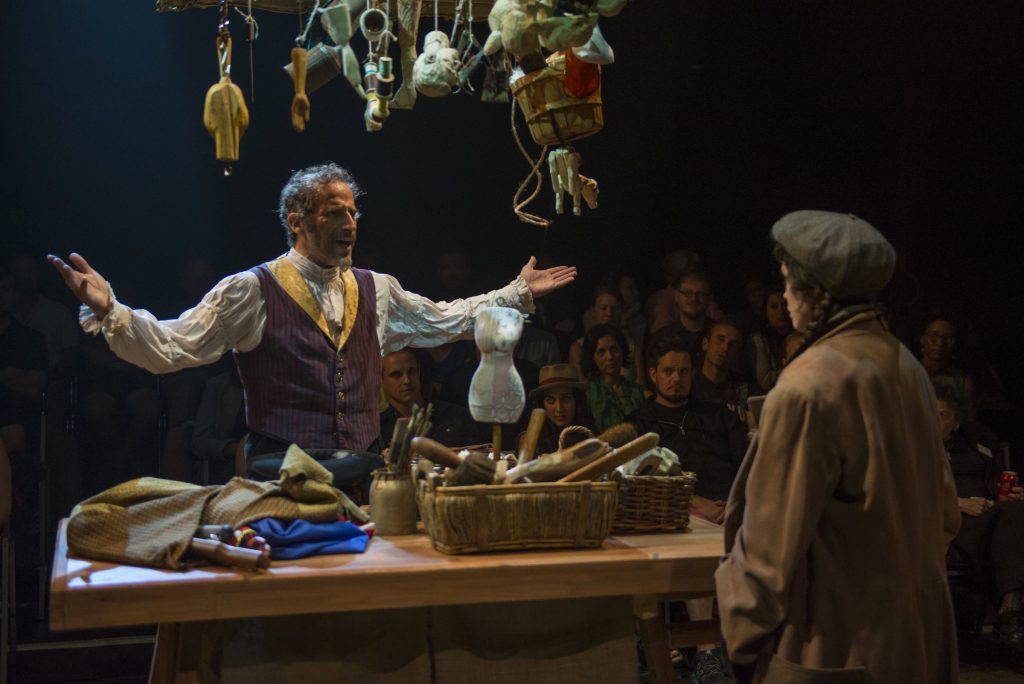 In The House Theatre’s world premiere of Kara Davidson’s “A Comedical Tragedy for Mister Punch,” youthful innocence comes face-to-papier-mâché-face with domestic abuse, police brutality and infanticide. And that’s only one of the plays Davidson’s meta new work has to offer. Based on and featuring the characters of the Punch and Judy puppet shows, this coming-of-age tale blends Dickensian social realism with the hysterical absurdity of puppetry. At its most divine, “Mister Punch” threads the needle between the infamous puppet show’s hyper violence and our own discontents, transforming the sinister Machiavellian into a sympathetic antihero.

Director Shade Murray keeps things moving at a solid clip during the first act and puts Lee Keenan’s jungle-gym set to good use, vaulting his players up, down and all around the fictional London setting. After a flurry of visual and verbal gags, “Mister Punch” takes a horrifying turn as the creations of puppet master Pietro (Adrian Danzig) come to life in the imagination of his young apprentice (Sarah Cartwright), the essential orphan upon which any good tale of nineteenth-century urban redemption is based.

On the strength of Izumi Inaba’s costumes (a regular parade of some of her best work that I’ve seen), Eleanor Kahn’s props and Jesse Mooney-Bullock’s puppets, “Mister Punch” descends into the hellish uncanny valley as reality becomes simultaneously disfigured and heightened. It is here that we catch our first glimpse at the cathartic power of violence and its ability to liberate us from the fixed game that is our existence.

Unfortunately, “Mister Punch” loses the thread after the intermission, becoming more Dostoyevsky than Dickens as it muses on the narcissism of artists. A meandering start to act two means much of the plot-based momentum of the first gets lost in a series of unnecessary barroom ballads. By the time the play’s ambiguous anti-climax arrives, we are in great need of the kind of laughs that sustain us through the hard times. It would seem that in its current form, the comedical part of the play’s title applies almost exclusively to the first half while the tragedy is reserved for the second.

Balancing these two opposing forces is not easy. Yet cutting the act break and tightening the focus (as well as the runtime) might enhance and sustain “Mister Punch” through what I hope will be a long life. (Kevin Greene)