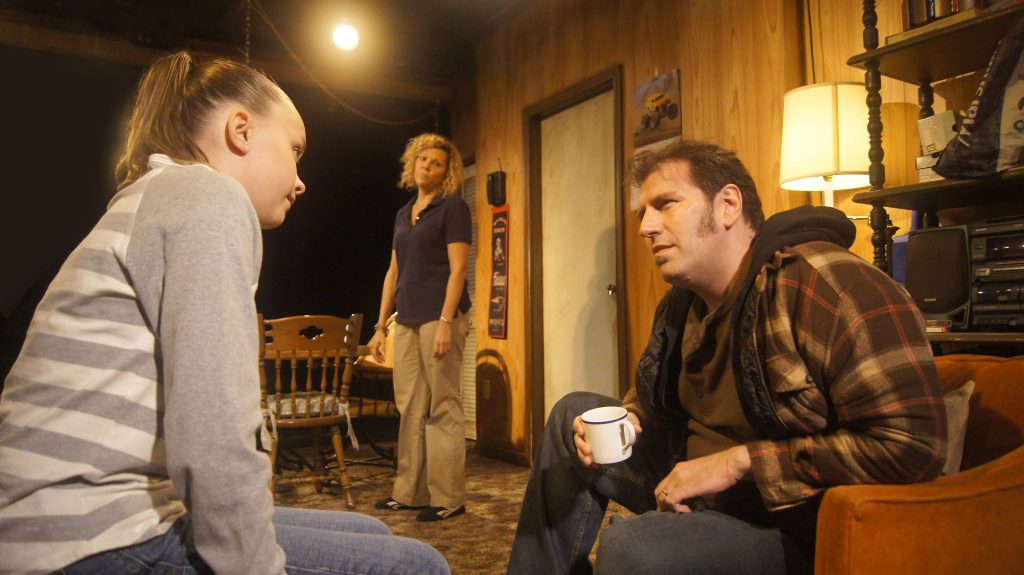 The people of the white underclass have become unwanted stars in an unexpected American show. Their trials and tribulations have been mocked on reality television and nakedly scrutinized in two highly rated books, “Hillbilly Elegy” and “White Trash.” Angry elements of the group have been ruthlessly exploited by the bloviating, inflammatory presidential campaign of Donald Trump. In “Scarcity,” Lucy Thurber’s drama about disabling dysfunction among the white poor in small town nowhere, a fictional family of similar circumstance is put through the wringer.

“Scarcity” has come just in time. Mounted by Redtwist Theatre in a little room that puts the audience members virtually on stage with the players, the show packs a real gut punch. It allows us to experience a little of the real pain, anger, anxiety, confusion and claustrophobia that the white poor feel as they try to make their way through a country and culture that has long favored whites—as long as they’re rich or middle class.

As the play opens, family members are dismantling one another, railing—in high volume—over matters large and small. The clan includes an alcoholic, perpetually unemployed husband (Mark Pracht), a breadwinning but compulsively cynical wife (Jacqueline Grandt), an ambitious teenaged son (Brendan Meyer) and a penetrating, perceptive pre-teen daughter (Ada Grey), who absorbs everything that goes on.

And that’s a lot for any young child to endure: poverty, discrimination, violence, adultery, rape and potential incest all permeate the setting. There seems to be only one hope: The son is given the chance to apply to a private high school that could be his ticket to greater things. Will family members rally to his cause?

This family is an American tragedy but the biggest victim may be the daughter. Everyone leans on her emotionally while mostly ignoring her needs and pleads. Even before private school becomes an issue, the husband and wife fixate on their son and what will become of him. Meanwhile, the girl languishes, her gradual disappointment and decline registered in the precociously resourceful face of Ada Grey. It’s a powerful performance in a biting, bitter look at the white-hot matters of America’s heart and soul. (Michael Amedeo)