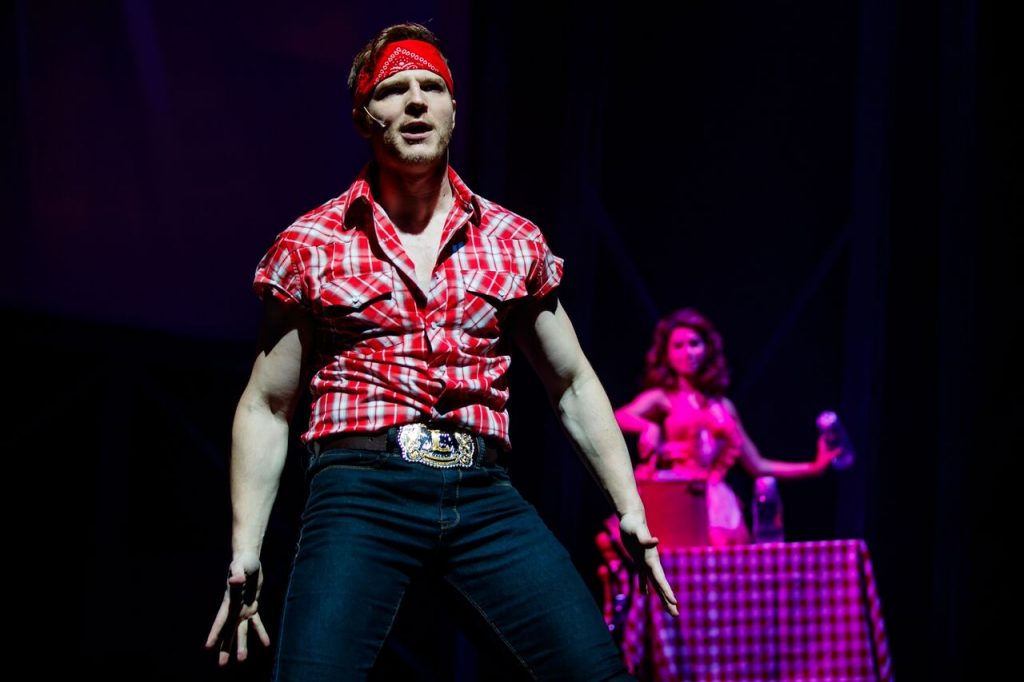 Each generation has its own teen sex comedies and for the baby boomers it was beach-based musicals. Film after film featured bad-boy heroes battling rich-kid villains against a back drop of tight bikinis and a lot of sand. The women swoon and shake their hips, the hero might play a little guitar, and it is pretty obvious who gets the girl at the end.

Featuring music by Berton Averre (who, as lead guitarist for The Knack, co-wrote the song “My Sharona”), “Helldrivers of Daytona,” a world premiere now playing at the Royal George, attempts to channel the sex-crazed energy of those films by pitting the All American Lucky Stubs (James Nedrud) against the not-so-secretly sexually deviant Count Portabello Porcini (David Sajewich). Both men love two things: Racing cars and the beautiful Pepper Johnson (Samantha Pauly), who came all the way from Apalachicola, Florida in hopes of meeting her dream man.

Unfortunately, “Helldrivers of Daytona” lacks the necessary charm and energy to work as a two-act musical. What should be a fun, silly romp is burdened with too many numbers that fail to either entertain or move the plot along.

Like an overworked race car, the material does occasionally come together to deliver a winner (“Teenage Dream,” with its not-so-innocent school-girl yearnings, was hilarious), but more often the show repeats gags that were only marginally funny to begin with. So when Pepper sings about her “crazy feeling,” it made me realize that Meg Ryan’s fake orgasm in “When Harry Met Sally” worked well in part because she only does it once. Imagine if she repeated the joke several more times.

The musical also tries too hard to make light of the sexist nature of the source material. Numbers like “Becoming a Woman” (with its graphic description of puberty) appear out of nowhere and are presented like monologues from an altogether different, likely more entertaining musical. In the end, “Helldrivers of Daytona” is neither the campy fun the title promises nor the more insightful musical it at times strives to be. (Noel Schecter)