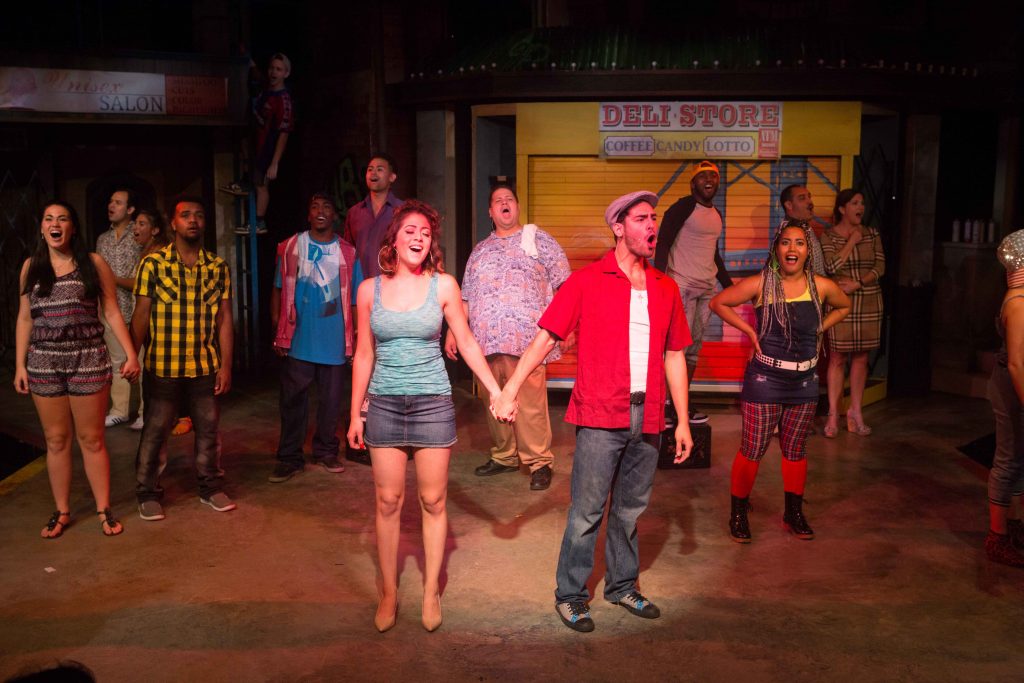 The cast of “In the Heights”/Photo: Gretchen Kelley

Like the song says: There’s nothing like summer in the city. Just in time for sweater weather (and only weeks ahead of the Midwest premiere of that little show called “Hamilton”), Lin-Manuel Miranda and Quiara Alegría Hudes’ scorching hot “In the Heights” opens Porchlight’s twenty-second season in a blaze of sensual, sensational glory.

Leading the show as Usnavi, newcomer Jack DeCesare channels Miranda’s anxious, nasally, top-of-the-beat delivery. DeCesare airs on the side of Usnavi’s nervousness, often seen playing with the bottom of his button down while delivering his rhymes with feet firmly planted in place. No doubt these are some big shoes to fill. And while he is more than comfortable with the words in his mouth, his stage presence could use a shot of confidence.

He doesn’t have to look far for examples: From the stunning pipes of Northwestern University junior Lucia Godinez and the smooth-as-melted-butter flow of Stephen Allen to the vivacity of Elena Romanowski’s salsa and the precision of Kristopher Knighton’s breaks, this cast is overflowing with talent and energy.

All of which serves them well as director Brenda Didier, along with co-choreographer Chris Carter, put the eighteen-person cast through their musical paces, using all corners of Greg Pinsoneault’s layered set, which pops with the added local color of Jose Arceo’s bold, beautiful graffiti.

Being in the audience for this show, you get the sense from the passion onstage to the sniffles and cheers in the audience that “In the Heights” is affecting in ways that differentiates it from other musicals. The conversation regarding representation, one that this production has not been impervious to, forms an important dimension in this musical, which is not about heroes and villains but rather real folk living their day-to-day lives. The themes of feeling powerless (used here in classic Miranda fashion as a double entendre) and accepting the responsibility for the experience of injustice and inequality are sadly still integral parts of the immigrant experience.

And so “In the Heights” isn’t timely so much as it is pointed: The truth has always been clear to the people who live it. The rest of us just need to get with the program.

“I found my island,” Usnavi declares at the show’s conclusion, in reference to that great melting pot known as Manhattan and, it’s implied, the United States. This profound, yet simple assertion is a necessary reminder that nobody owns America. We all share it. (Kevin Greene)