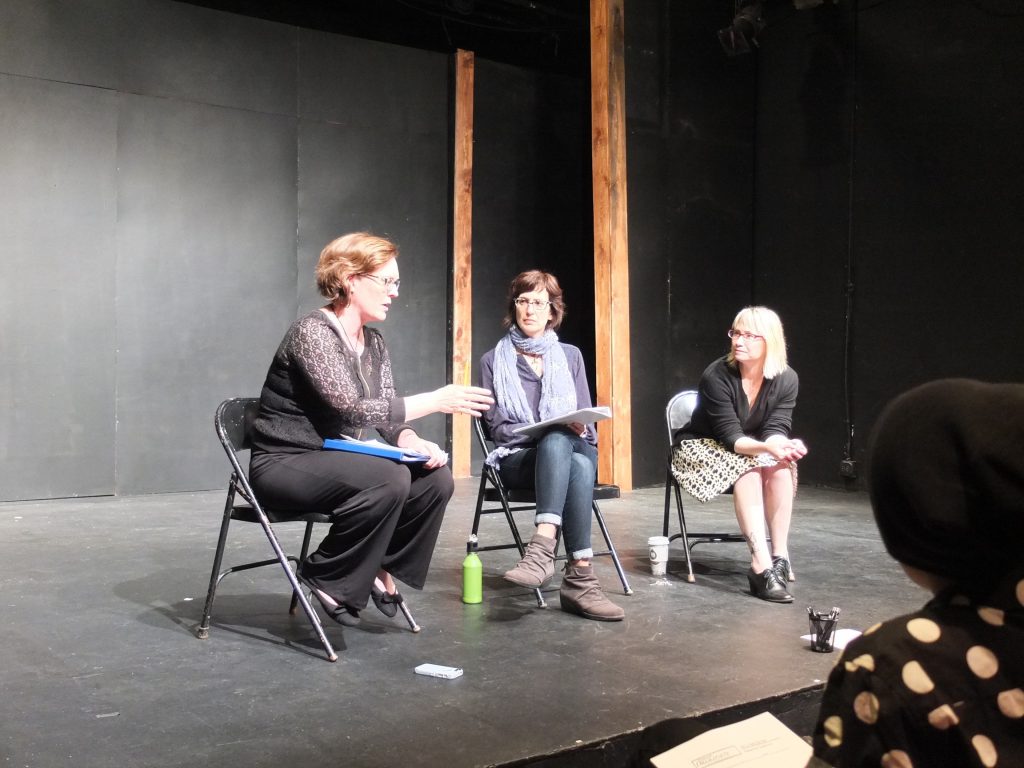 In taking on a new subtitle, “The Center for New Play Development,” Chicago Dramatists are updating their programming to create more opportunities for their resident playwrights. To better focus their efforts on play development, Chicago Dramatists will no longer be a producing theater.

“Managing director Cindy Jo Savitski-Lantz and I scrutinized all of our programming and made sure that it was mission aligned,” says Meghan Beals, who was appointed artistic director in August 2015, filling the position left by the late Russ Tutterow. “When you’re producing, you’re cultivating an audience, brand, personality and community. And you have to just get butts in seats.”

They plan to take the time previously used for production to work for “the art and the artists.”

“We reprioritized the resident playwrights as they are the reason we exist, first and foremost,” says Beals.

“It was amazing that we had such lifelong artistic relationships with some writers but it didn’t leave room for others to come in,” Beals reports. “Now we will make the limit six years, so the writers will deliberately choose and prioritize us for six years, and us, them.”

“The Chicago Dramatists has a stellar group of playwrights that are growing in their craft,” says García-Romero. “To have that community as an artist is rare.”

García-Romero currently works at the University of Notre Dame as the Thomas J. and Robert T. Rolfs assistant professor in the Department of Film, Television and Theatre. She came to Notre Dame from Los Angeles, where she previously lived for over ten years.

Members of the theater community encouraged her to seek out Chicago Dramatists and apply for their Resident Playwright program. After attending some of the productions and readings there, she applied and received one of their residencies.

“For a playwright, Chicago is an amazing city,” she says. “This is a city that is dedicated to developing new theatrical works, which is both unique and exciting. Chicago Dramatists has been at the forefront of this for over three decades.”

While their current residency program focuses on seasoned and experienced playwrights, in January Chicago Dramatists will be launching a pilot program that serves writers that are just starting their careers: the Tutterow Fellowship. They plan for two-thirds of those served by the program to be writers of color.

To create more workshop opportunities for residents, Chicago Dramatists is launching the “28-Hour Workshop” initiative. In this program, a resident playwright is selected to rehearse a new play for twenty-eight hours with a full cast, director and dramaturg.

García-Romero’s play “Lorca in New York,” which is a commission from the Denver Center for the Performing Arts, will be the first play featured in the initiative. New York City-based director Leah C. Gardiner will join the workshop.

“I can’t wait to delve into the linguistic and theatrical terrain of my play with a team of talented theater artists,” says García-Romero. “It’s truly a wonderful opportunity to spend an ample amount of time developing and revising new material.”

Sometimes in playwriting, there can be a pressure to have determined results quickly but with this program, García-Romero says, the playwrights have the “luxury of twenty-eight hours to explore a new script and take it to the next level.”

“The ’28-Hour Workshop’ program is strengthening the work of Chicago Dramatists,” she continues. ”It’s about a process, not the results.”

Looking forward, Beals sees Chicago Dramatists in a unique position to not only focus on play development but also support other theater organizations.

“Ideally, we could eventually partner with or support our writers at every theater here in Chicago,” she muses. “That’s kind of my dream. To make those connections and facilitate the work. We’ll do anything we need to do to support the development of our writers.”

Upcoming Chicago Dramatists events include a September 17 public showcase of new resident work and their first day-long conference on October 1, which will feature playwriting panel discussions, mini-sessions on the business of theater, discussions on the changing face of new play development and a Grafting Project play following the event.