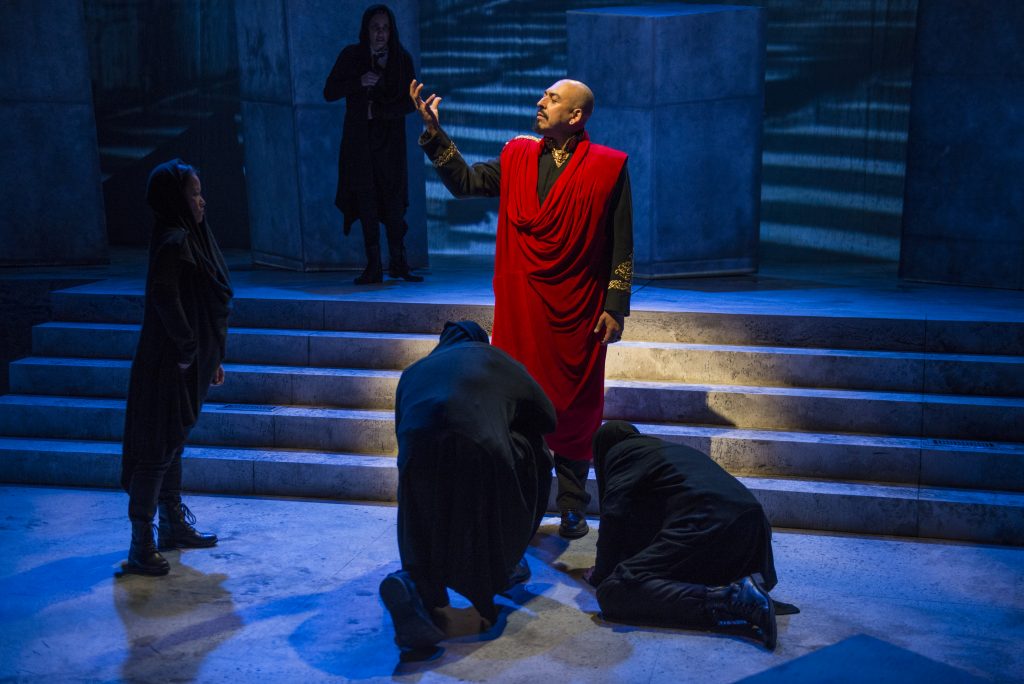 At points throughout “Julius Caesar,” which opens Writers Theatre’s twenty-fifth season, I found myself contemplating perhaps the most famous reflection on the rulers of Rome: “Render unto Caesar the things that are Caesar’s.” Grating attempts at political relevance aside (the blatant usage of Trumpisms might be a revolutionary act in Glencoe but from down here it looks a shade opportunistic), this “Julius Caesar” is in need of more Caesar.

What we find in this vision of Shakespeare’s epic political struggle, adapted and directed by Michael Halberstam and Scott Parkinson (who also stars as Cassius), is a man who is sacrificed in the name of the people only to be born again as the figurehead of a patriarchal consolidation of power. And while Shakespeare is well known for fixing his attentions on characters who are not honored titularly in his works, he who looms large and is dispensed for reasons both petty and noble is never given an opportunity to be despised. While we may revile the slithering Cassius, though I do think Parkinson and Halberstam have worked to soften him up a bit, or loathe the ingrate Octavius (Sydney Germaine), the man for whom the play is named is found more often in the words of others than in his own deeds.

Perhaps this is a comment on the power of rhetoric, which is of extreme importance here. As they say in Hollywood: Story is King. Indeed, the central scene in “Julius Caesar” is a public debate over the legacy of the man who was, at the time of his departure, dictator in all but title. Furthermore, it is their wounded narrative, more so than lack of foresight and reinforcements, that ultimately undoes Brutus (Kareem Bandealy) and Cassius.

There is a lot to chew on in Writers’ election-era “Caesar”: Hashtags, live streams, tweets, emojis, the general contrast of ancient columns and up-to-the-minute updates. But not much really sticks. Perhaps that’s because the root of all the vitriol and violence is a man who has seemingly been written out of his own history.

If there is a lesson here, it is one that we have not yet had the misfortune of learning. (Kevin Greene)