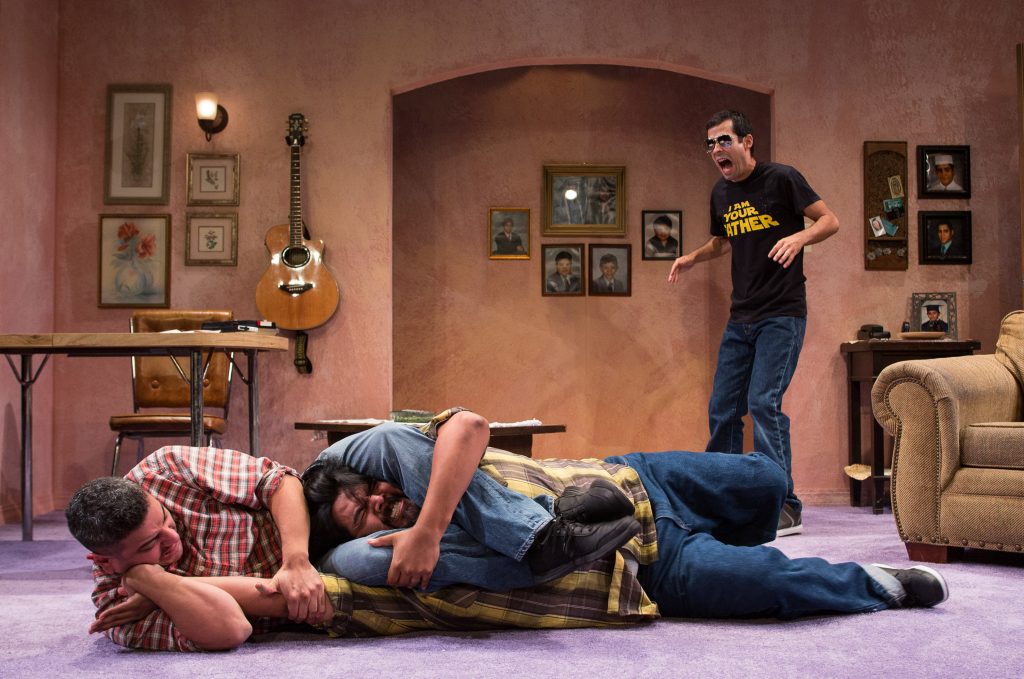 “Parachute Men” by Mando Alvarado, the first of three world premieres presented by Teatro Vista this season, has a lot of heart. By this I mean that the play’s intentions come from a place of love and truth. However, to tell a story effectively requires more than the best of intentions.
“Parachute Men” is the story of three brothers, Eric (J. Salome Martinez), Andrew (Eddie Martinez) and Eli (Tommy Rivera Vega). All three are trying to wrestle with this demon called Life and keep their heads above water after the tragic loss of their mother. When Eric, after being gone for five years, returns on the anniversary of their mother’s death, we begin to see just how cracked the foundation of this family is.
After being abandoned by Eric, the eldest brother, Andrew, who is a police officer, has now stepped into the role of “man of the house. ” Andrew is now taking care of his younger disabled brother Eli, supporting the family financially, and making sure his stepfather, a recovering drug addict, stays on the wagon. Eric, by contrast, escaped all this responsibility when he went in search of others to save instead of his own family.
The best moments of this play come when the brothers examine why their relationship is fragmented. However, those moments are often drowned out by excessive distractions that take you out of the world of the play. Specifically Eric’s weird (for lack of a better word) character flaw that is given entirely too much stage time. It’s good for laughs initially but as time goes on it becomes absurd and cringe-worthy.
There are heart-tugging moments in this play. Vega, as Eli, wins the hearts of the entire audience with his honest portrayal of a person living with a disability. You root for him to win those things he wants and your heart melts when he confesses his love for his not-so-upstanding older brother, who is his hero. Director Ricardo Gutierrez makes the final moment, when the brothers come together, sing. But despite the occasional tugs at the heart, the distractions override what had the makings of a heart-gripping story of brotherhood. (Loy Webb)
Teatro Vista at Victory Gardens, 2433 North Lincoln, (773)871-3000, teatrovista.org, $15-$35. Through October 16.