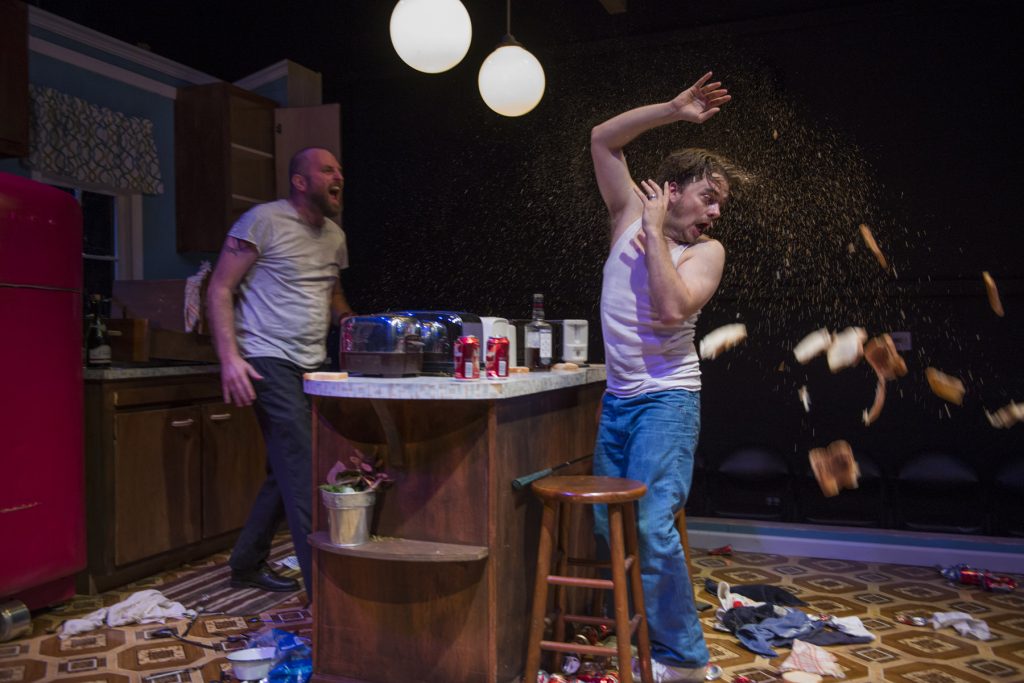 As symbols for the distinctly American brand of existential emptiness you can do worse than pale beer and white bread. There are plenty of both in Sam Shepard’s “True West,” currently playing at Shattered Globe Theatre. But what do we make of Shepard’s play in the time of craft cocktails and quinoa? Despite elements of actual danger, from open flames to swinging clubs and the subsequent typewriter bits sailing into the audience, director James Yost aims for absurdist yuks. He succeeds but at the expense of the deeper meaning that might have illuminated why “True West” is relevant thirty-six years after its premiere.

Myriad problems plague this production from the staging to the casting. The set, courtesy Greg Pinsoneault, is a picture of postwar serenity that is unpacked in most repellant fashion over the course of the play. However, its dramatic thrust means that leads Kevin Viol and Joseph Wiens are frequently in the undesirable position of playing lengthy scenes with their backs to large portions of the audience. From where I was sitting I hardly glimpsed Viol’s face during the duration of the first act and I imagine those elsewhere in the audience might have had similar complaints.

The show relies on the interactions between brothers Austin and Lee who spend most of their time on stage unaccompanied save for the ceaseless murmur of crickets. As Austin, Viol is overly nebbish and could use a shot of screenwriter swagger (see: Woody Allen circa “Annie Hall”). Wiens is best when leering, his moments of silent stillness far more intimidating than his eruptions of violence.

With the assistance of Rob Frankel’s pitch-perfect studio creep and Rebecca Jordan’s eerily detached mother, “True West” dissolves like an antacid in water until it becomes nothing but bubbles furiously racing toward their own demise.

Then there’s the desert, a symbol of some significance to Shepard. Here it stands for something like the crisis of the baby boomers who, through the labors of their parents and grandparents, were born into a brave new world only to feel utterly trapped by it. It’s a restless irony and by the play’s conclusion you almost feel sorry for these self-destructive heathens who never had a chance and whose time has long since passed. (Kevin Greene)