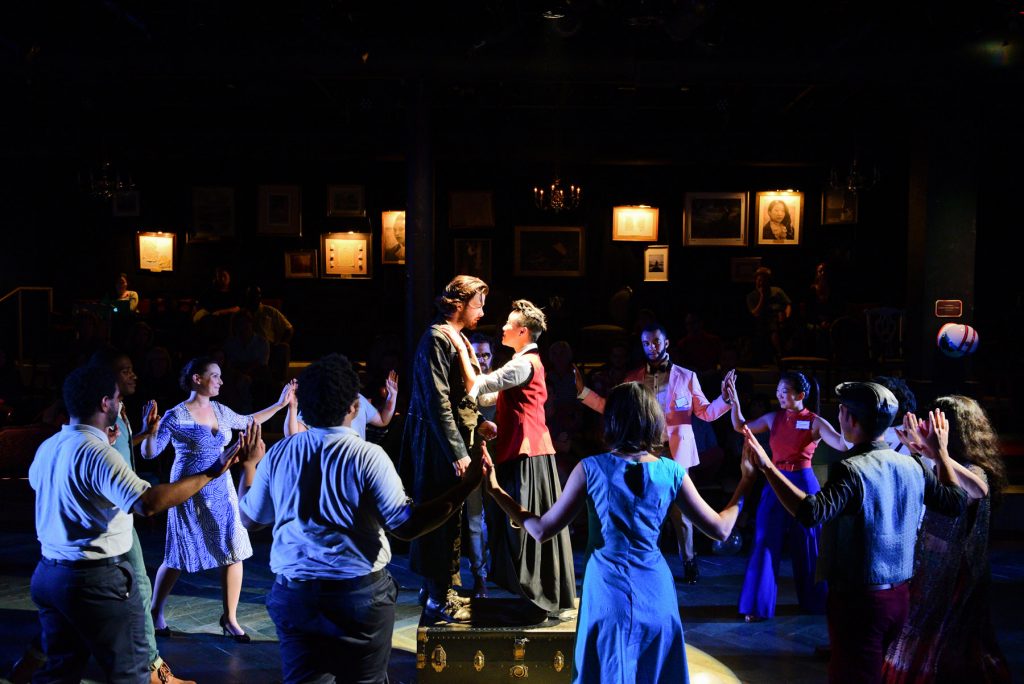 Japhet Balaban and Emjoy Gavino with the cast of “You on the Moors Now”/Photo: Evan Hanover

Born from the same universe as last season’s “Johanna Faustus” but exerting a greater gravitational force, Jaclyn Backhaus’ “You on the Moors Now” is a witty slice of meta-fiction and a loving tribute to the foundation of feminist literature and activism.

Drawn from the works of Jane Austen, Louisa May Alcott and the Brontë sisters, “Moors” features a regular smorgasbord of young, diverse talent hand-plucked from some of the most lauded shows of the last year including Maurice Demus (“Sucker Punch”), Sarah Price (“Mai Dang Lao”), Brittnay Love Smith (“The Secretaries”), Deanna Myers (“The King of the Yees”), Emjoy Gavino (“Love and Information”) and Japhet Balaban (“Never the Sinner”), just to name a few.

While the dramatic action and comedic material is spread well across the entire cast, the chemistry between Gavino and Balaban is particularly explosive. As Catherine Earnshaw and Heathcliff from Emily Brontë’s singular novel “Wuthering Heights,” the pair serve as the odd couple out in the otherwise anti-romances of “Pride and Prejudice,” “Little Women” and “Jane Eyre,” as reimagined by Backhaus using the feminist mantra of “‘No’ means No” as her starting point.

The incestuous intensity of their problematic relationship leads to their mutual alienation from each other and their respective camps. Balaban burns white hot but it’s Gavino who is the true revelation as Cathy, a firebrand capable of reaching deep within herself to dredge out hideous truths that are somehow beautiful in the right light.

Recontextualized for the benefit of all, feminist or not, Backhaus’ play will undoubtedly draw new readers to its source materials and inspire fans to revisit these quietly heroic women and their timeless characters. Perhaps more importantly, “You on the Moors Now” is a reflection on the stories we tell young women about who they are and what they can be. For as Eleanor Roosevelt, interrupting some mansplaining old windbag, once said, “Shut it, I’m speaking now.” (Kevin Greene)