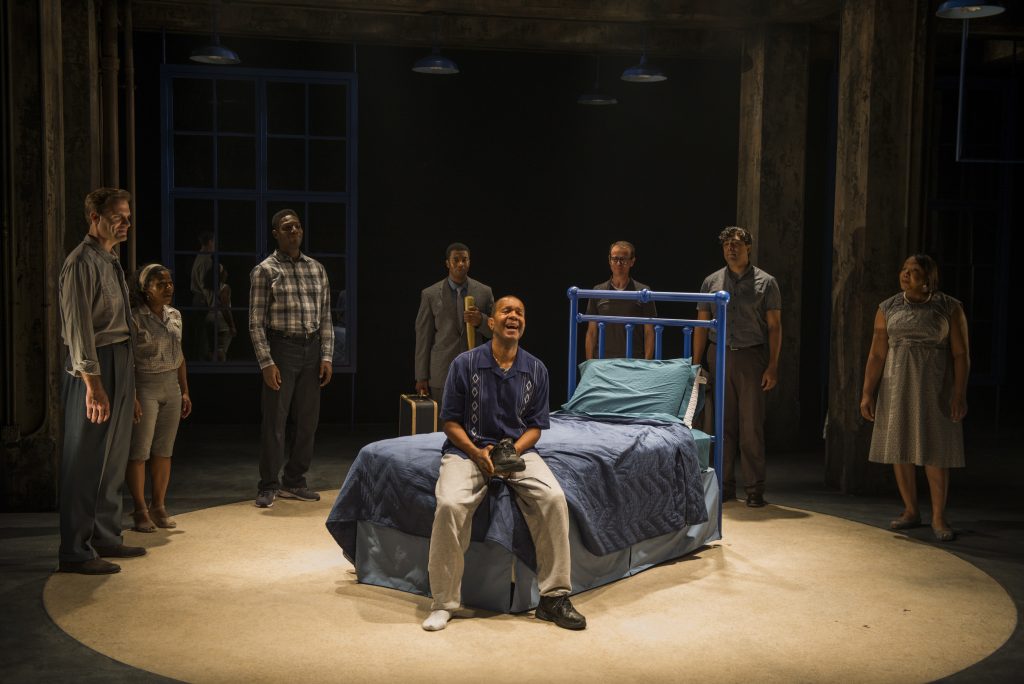 Allen Gilmore (front) with the cast of “Man in the Ring”/Photo: Michael Brosilow

“Brown boy in the ring/Tra-la-la-la-la,” goes the refrain of Michael Cristofer’s world premiere “Man in the Ring.” And while we eventually learn that the song originates from a form of young romantic initiation, it also serves as a neat metaphor for a certain prevailing attitude toward athletes: As long as you stay in line (or in this case, the ring), we, as your audience, will support you. At a time when Colin Kaepernick is receiving death threats, there is painful resonance to the story of Emile Griffith, the world’s greatest welterweight fighter and a man dogged by the injustices of the past that echo into the future.

Cristofer’s play is a demented trip down Griffith’s memory lane. Due to his lengthy career in a punishing line of work, the boxer developed dementia pugilistica, a degenerative condition that is at the root of his erratic mood swings, forgetfulness and the sometimes sweet though frequently painful recollections of his past.

Directed by Charles Newell, “Man in the Ring” blends dramatic vignettes with stylized stage images in addition to music and dance. At times it can seem like the various elements are competing against each other to be crowned the dominant form. Elsewhere, imagery feels borrowed; the shadow of Martin Scorsese’s iconic “Raging Bull” is both long and deep.

While Allen Gilmore (the aged Emile) and Jacqueline Williams (his mother) convincingly navigate between deep pain and ecstatic pleasure, as the young Emile, Kamal Angelo Bolden’s performance is currently lacking the same kind of dimension. He is frequently the most restrained person on stage even when his joie de vivre is supposed to be in full effect. As one half of the play’s central character, he would do well to express Griffith’s full range of emotions even before his descent into the void of dementia.

“Man in the Ring” wants for focus. Scenes can feel isolated due to their lack of connection to what they precede and follow. There is an abundance of themes without much to indicate a moral though this feels very much like a story that can and indeed should have one. (Kevin Greene)