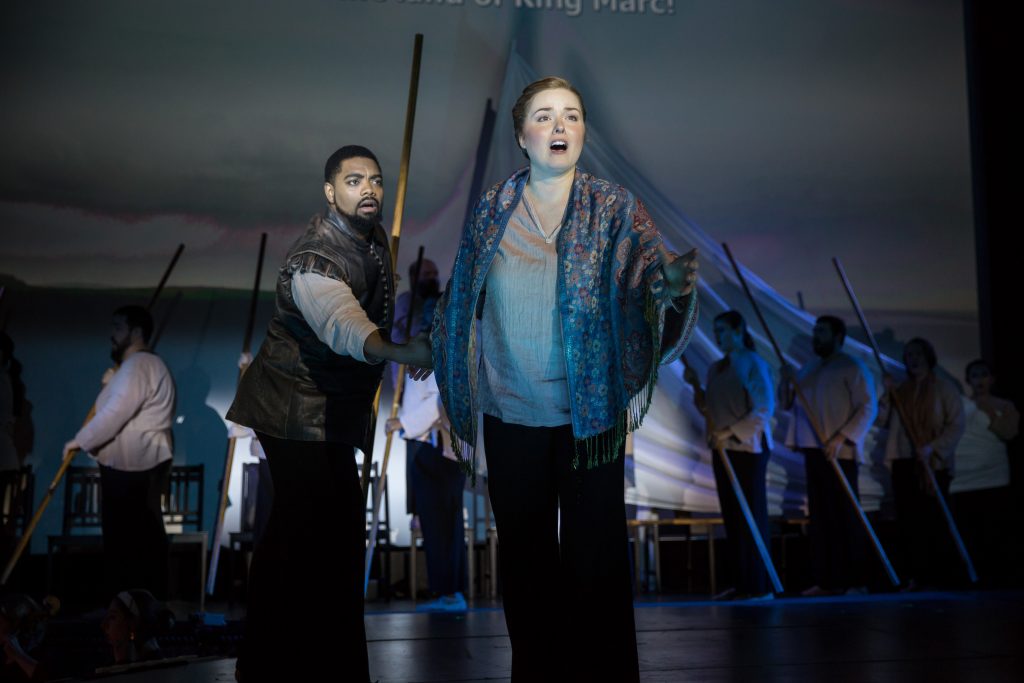 Chicago Opera Theater throws down the gauntlet of change and chance with its 2016/17 season opener, “The Love Potion.” Composer Frank Martin’s little-known telling of the medieval legend of Tristan and Isolde is being heard in a very limited run in Chicago’s historic Music Box Theatre. Mounted in this venue, this piece presents majestic challenges for both performers and audiences and, consequently, for the company as well. However, growth can only come of industry.

Martin named this piece a “secular oratorio” and felt he had found his distinctive voice during its shaping. Written for twelve solo singers, most of whom step out of choral connection to create the named characters, Martin intertwines liturgical chant with Stravinsky’s twelve-tone technique and moments of spectacular tonal exclamation. The score is either someone’s cup of tea, lending their ears and eyes a hypnotic distance from the action, or dissatisfies in so doing. Either Martin hits it out of the park or is out for the count.

The Music Box Theatre is unaccustomed to hosting classical music events although it is adept at scheduling multiple art forms, giving highly varied performances within the same day. Steps away from Wrigley Field, this section of the city bursts with eclectic restaurants and pubs in which to heavily imbibe and cheer in throat-ripping fashion for Cub victories. This acoustically sound venue’s potential for connection with a new and excitable audience unfortunately offers COT patrons a dearth of parking.

Will COT secure a solid place as our city’s “B Company” by producing unfamiliar works in unlikely spaces without sliding into the land of the “C Company” where meager funding can be made obvious by paltry production values? I cry out, “Play ball!” (Aaron Hunt)