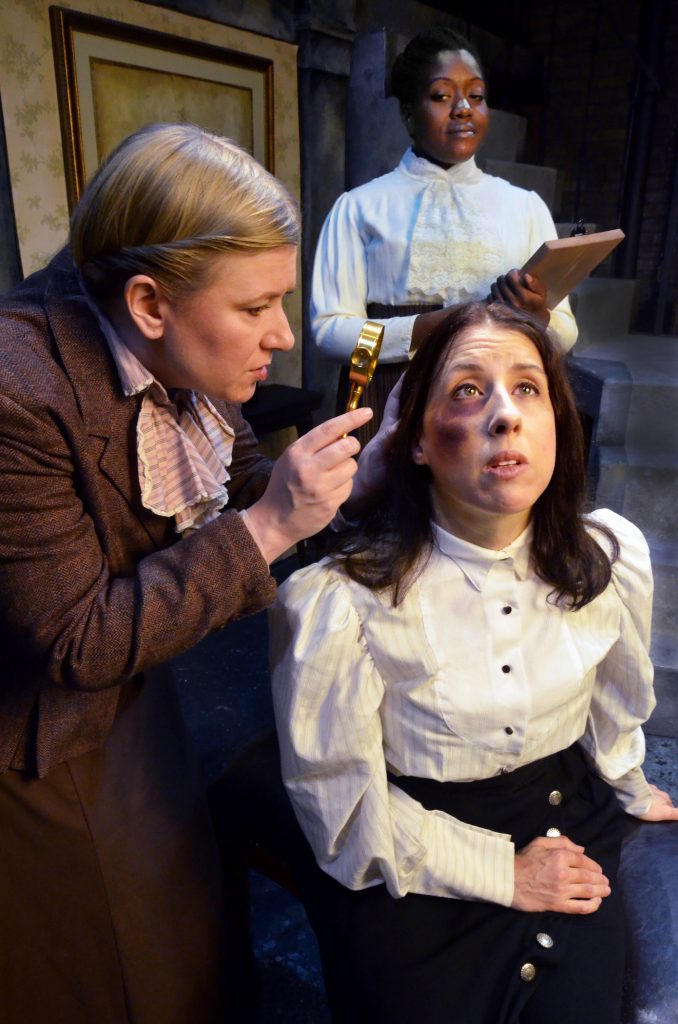 Sherlock Holmes was the greatest detective England has ever known. Sherlock Holmes operated on a simple method of observation, ratiocination and deduction. Sherlock Holmes amplified the scratch, the mote, the speck and the drop to definitive narratives of disposition and culpability. Augmenting a consummate sensitivity with an intellect capable of accommodating such a faculty, there was but one minuscule detail about his notorious hero that Sir Arthur Conan Doyle omitted from the view of his Victorian audience: Sherlock Holmes was a woman. More than one-hundred years after Holmes’ first appearance, Christopher M. Walsh takes the thought experiment to its logical conclusion in his new play “Miss Holmes,” directed by Paul S. Holmquist and executed with precision, pluck and commitment in a riveting production by the Lifeline Theatre Ensemble.

What if Holmes were a woman? Would she be able to roam at ease from Scotland Yard to the opium dens, scratch out melancholy ruminations on her violin at all hours, conduct chemistry experiments at home, ruthlessly demand tea and obedience from Mrs. Hudson, freely castigate Lestrade? Would she have a band of rambunctious youths at her beck and call? Would helpless women weep in her Baker Street flat, faint smudges on their otherwise white gloves revealing the provenance of the hansom driver that had gone a circuitous route to the door? What if Dr. Watson were also a woman—would she be able to assert her diagnoses so resolutely, demand first audience with bleeding victims, wield her little pistol with the cool aplomb of ownership?

Walsh’s lonely Holmes (Katie McLean Hainsworth) is sorely in need of the companionship found in her doughty second, Watson (Mandy Walsh), a spirited rebel who hasn’t forgotten her part in the Surgeon’s Hall Riot of 1870, where she and other women resisted humiliation and abuse to study medicine. Together, they investigate the mysterious deaths of several women, thwarting not only the nefarious schemes of murderers and crime bosses but also the patronizing supervision of Holmes’ brother Mycroft (Chris Hainsworth), who pays Watson to inform upon and chaperone a sister whose acuity is conflated with madness. (Irene Hsiao)