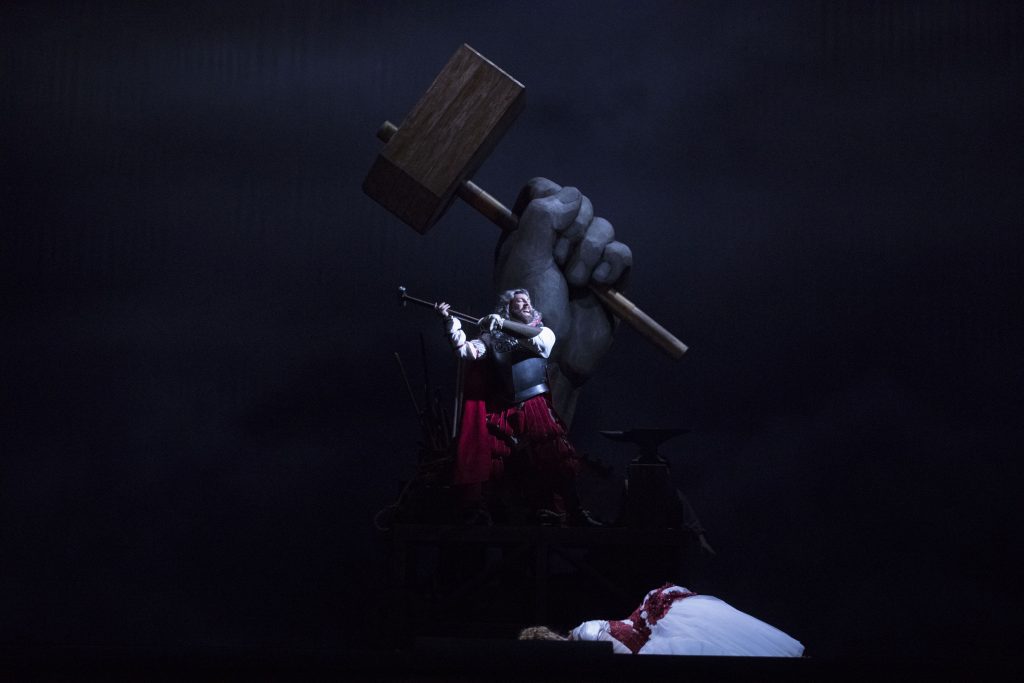 Once upon a time, three fate-controlling Norn sisters crept into an abandoned factory and pulled “Das Rheingold” out of an enchanted satchel. Set against the backdrop of the Industrial Revolution of Wagner’s own time, with all the characters entrapped in the Victorian age by Marie-Jeanne Lecca’s sumptuous costumes, director David Pountney’s new production both caresses and pounds the visual senses in synchronization with Wagner’s plush and insistent compositional palate.

The late Johan Engels and Robert Innes Hopkins’ set design suspends the chattering and teasing Rheinmaidens on cranes, whizzing them through a stage-deep pond. Azure textiles controlled by pulleys rush and gush over, under and around them. Hot-air balloon-giants float across the stage, threatening and thrashing, holding Laura Wilde (Freia) gently in the palm of a mammoth hand. By the power of The Ring, Samuel Youn (Alberich) magically turns himself first into a dragon then into a toad. The sly, preening, fantastic, fantastical Štefan Margita (Loge) drags the audience into the action on the back of his recumbent bicycle.

There could not have been a more auspicious launch of the first installment of Lyric’s Ring Cycle.

The sole disappointment of the evening was the portrayal of Lyric favorite Eric Owens (Wotan). If he was playing at contemplative, he goes too far into his own mind. His voice sounded similarly secretive. Baritone Zachary Nelson (Donner) looks the part of Head God, moves with agile authority and sports a lightning-bolt voice enveloped in a silvery sheath. Is he the next generation’s Wotan?

Fated to wait an entire year to hear Brünnhilde’s trumpeted battle cry “Ho jo to ho!” in “Die Walküre,” Lyric’s audiences can only hide away in their private Valhalla, daydreaming of more enchantment. (Aaron Hunt)