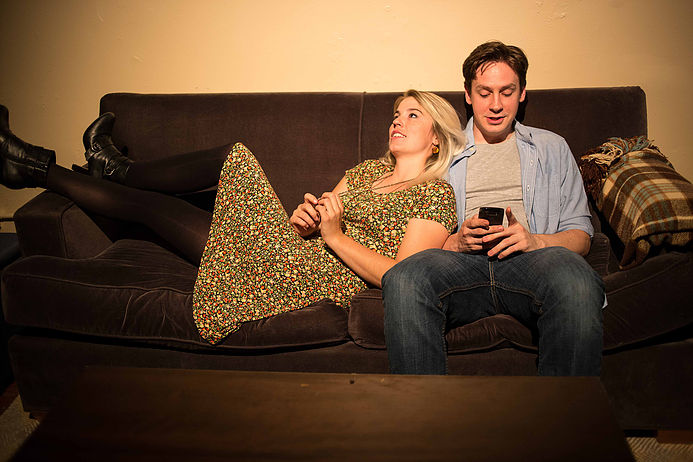 The millennial generation has been derided as entitled, narcissistic and directionless twats fused to their electronic devices. Lucas Kavner’s “Fish Eye,” a drama (if such a word can be used to describe a play in which nothing occurs) about the tedious relationship of an insipid couple, highlights these qualities by presenting them without the interruption of any narrative or affective shifts.

“My boss said I gave a really good presentation and if I kept it up I could be president of the United States,” says Max (Cory Hardin) to Jay (Stephen Rowland) at the prompting of his girlfriend, Anna (Katherine Lamb). Jay is Anna’s college boyfriend. He has a better job than Max, one that allows him to simultaneously incinerate barrels of jet fuel and claim that he is saving the environment at climate-change conferences worldwide. He’s also smarter and more interesting than Max, because everyone is.

But Anna, who works as a film production assistant because she lacks the initiative to do more, sublimates her failure of imagination into her professed love for the aimless man. Anna is wasting her life, Jay politely informs her. He reminds her of the dazzling potential she displayed in her student film, “Carrots and Celery.” She believes him and applies to film school then cries when she gets in.

Because Max needs an insignificant other, too, his hot blonde friend Avery (Morgan Crouch) sometimes comes by and they sometimes have sex but it doesn’t mean anything. Hardin emotes with enough sincerity that you wish he’d gotten to play Willy Loman instead. Love, we’re assured, is obsession with someone else’s Facebook feed, looking at all ten thousand selfies and panicking when the object of your affection is shown therein with someone else.

Depicted in percussive shorts—cell-phone conversations that overlap, trail off or have no observable auditor and awkward flirtations that illustrate the absence of any effort to conquer or submit—and ambitious in neither plot nor principle, “Fish Eye” attempts to make something of the trivial acts and minor feelings of psychologically flabby people. (Irene Hsiao)