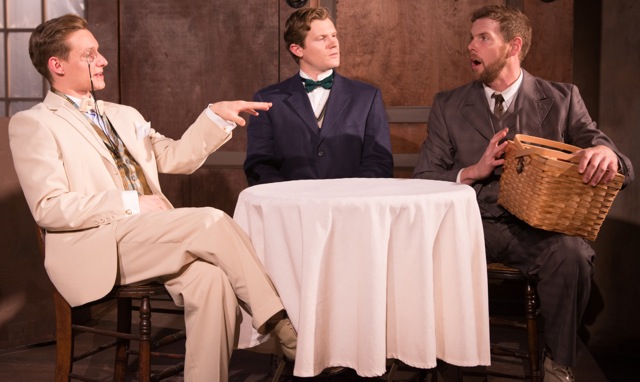 We can’t take Psmith literally: He’s not a journalist nor does he wish to become one. Rather, this endlessly witty character—whose story was adapted from the P.G. Wodehouse novel “Psmith, Journalist” into this production at City Lit—loves to create conflict that turns up the heat and generates excitement and even danger. A monocled and dandyish young Brit on vacation in Manhattan in 1915, Psmith (Richard Eisloeffel) sees trouble and seizes it, benevolently preying on unhappy editor Billy Windsor (John Blick) and persuading him to transform his vapid and vacuous domestic weekly, Cozy Moments, into a tabloid-like rag.

At Psmith’s behest, they do an ongoing exposé on a crumbling tenement that’s exploiting tenants to the tune of extortionate prices. The building’s rich owner (Lee Wichman) grows hostile and hires some of New York’s infamous gang thugs to intimidate and even eliminate the paper’s leadership.

To counter, Psmith comes up with the ingenious idea of hiring a local boxing star, Kid Brady (Patrick Delaney), to serve as bodyguard, a kind of editor-in-force. The paper then covers and promotes the boxer’s matches to the delight of its growing readership. But readers breathlessly await the paper’s ultimate issue, when Psmith and Billy promise to reveal the slumlord’s identity. The created drama becomes like reality television, decades before the invention of the picture tube.

The goings-on excite and amuse—in the novel. Wodehouse’s ironic and understated humor reads well. What we don’t quite get the first time we can always re-read. But how do we replay a play? The City Lit adaptation is drunk with words; the lines come at such a fast and furious pace that incoherence is often the result. On opening night, Eisloeffel sometimes faltered, seemingly losing track of where he was verbally. And now let’s imagine how the audience felt. Purple prose created a kind of purple haze for the poor onlookers.

That’s too bad because buried underneath the prose is an intriguing idea: journalism is no easily definable thing. It can pander and exaggerate, exploit and fabricate. It can sometimes even uncover. We can only hope that somehow, through it all, the truth will come out. (Michael Amedeo)