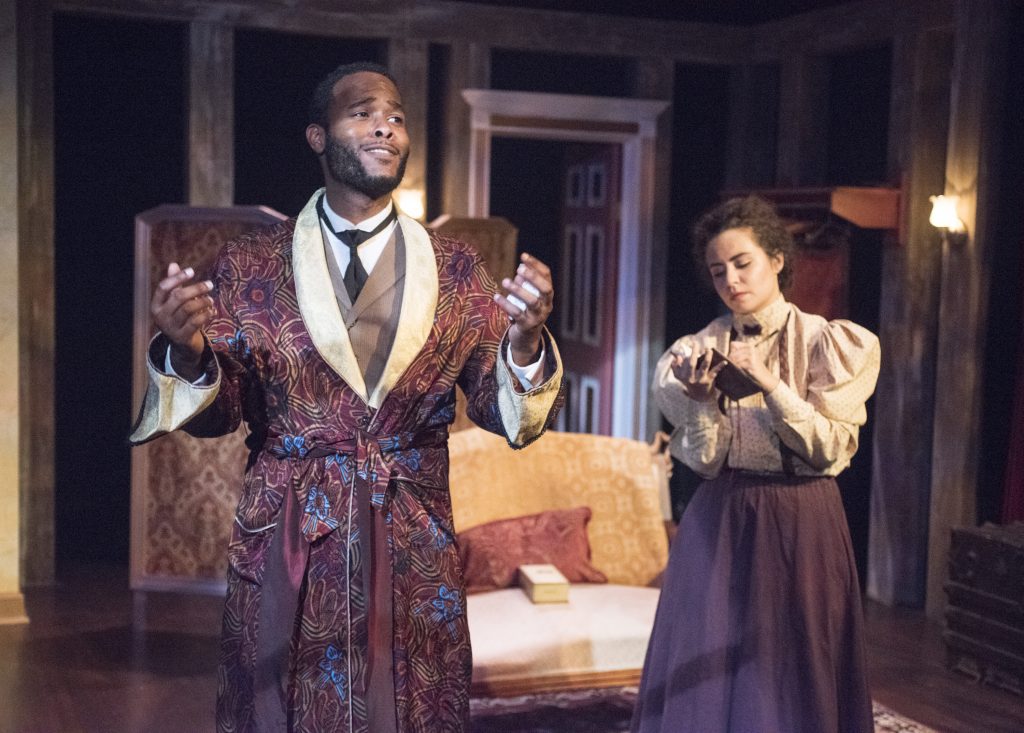 The story of Ira Aldridge, the first black actor to play Othello in England, is a tale that is made for the stage. Lolita Chakrabarti’s “Red Velvet” takes a “Citizen Kane”-like approach to a pivotal moment in Aldridge’s career. Her play finds an ideal home at Raven Theatre, a company that, at its most sublime, serves as mediator between tradition and progress.

Structurally, “Red Velvet” is an actor’s play. Divided into six significant scenes each with its own rhythm and trajectory, the first half of this production moves swiftly through its setup. The second brings the simmering tensions to a boil just a hair too quickly, and in doing so risks turning this otherwise taut drama into melodramatic mush.

The acting here is big, befitting the period. That quality is well addressed in the “offstage” action especially as it pertains to Ira’s hot blood and his modern, hands-on approach to acting. As the lead, Brandon Greenhouse huffs and puffs but is best when he reveals the tender innards of a man so consistently flogged by the world at large. Chakrabarti weaves elements of “Othello” into the fabric of this tragedy, highlighting the insidious politeness of racism in the early nineteenth century with plenty of subtle echoes to contemporary dog whistling and race baiting.

As a criticism of racism, with a vocal figure of color at its center, Chakrabarti lets the times (and The Times) speak for themselves. And while this is ostensibly Ira’s story, “Red Velvet” is also about the inner workings of those who hold hierarchical views of society and human life. We see an incremental shift in the red-faced Bernard (Scott Olson) toward Aldridge after he sees his own parlor room racism exposed for what it truly is in the vitriolic response to Aldridge’s presence on the sacred stage of Covent Garden. Even the hinted attraction between Aldridge and his co-star Ellen Tree (Tuckie White) seems to be more about awakening her inner feminist.

And this is an interesting caveat: As an English woman of color, Chakrabarti feels remarkably assured in expanding the scope of inequality to include ethnicity (in the case of the French theater manager) and gender so much so that Aldridge becomes less the central figure and more the catalyst for and representative of change to come. (Kevin Greene)