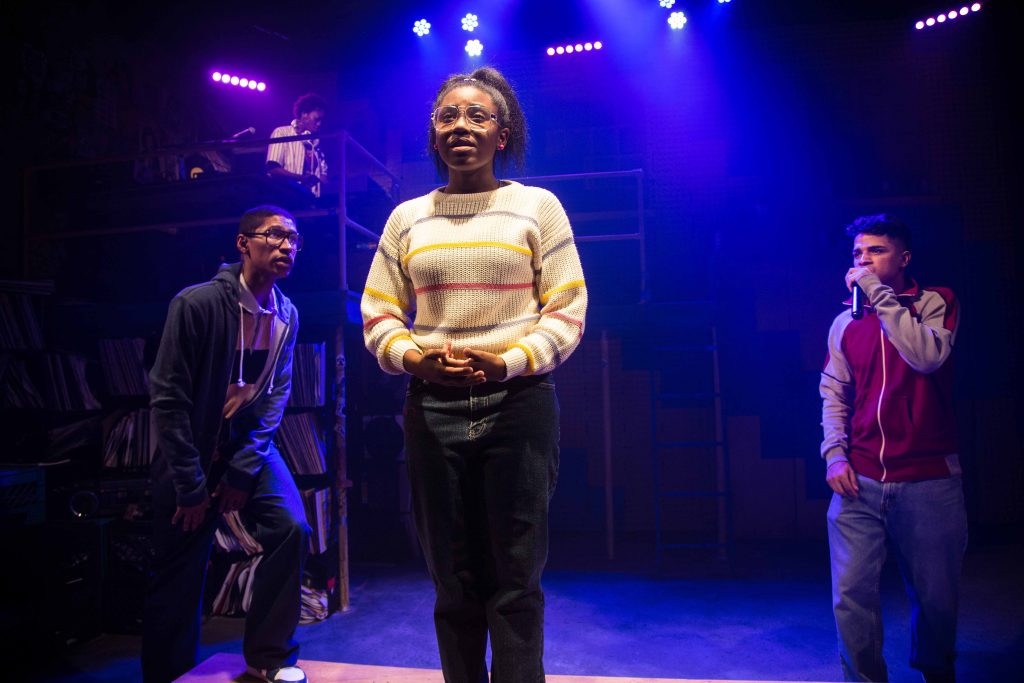 In the beginning there were MCs. DJs. B-girls. B-boys. Idris Goodwin’s “How We Got On” takes us back to the summer of ’88, the dawn of the golden era of hip-hop. It also takes us to The Hill, the figurative representation of the suburban town just far enough from The City so as to not feel its pressures but just close enough to whiff its freshness. Guided by Selector (Angela Alise as the professor of cool) with the mechanics of beat-making built into its structure, “How We Got On” is as resourceful as it is soulful, as it is truthful, as it is wonderful.

On that note: Enter Ireon Roach. As Luann she rips a hole through the ceiling of misogyny in hip-hop (not to mention the minds of these young MCs) with her off-the-cuff rhymes. Lanier and Nieves bring a lot to the table (the former’s facial expressions alone are worth the price of admission) but Roach (you may know her from award-winning performances at Louder Than A Bomb and the National August Wilson Monologue Competition) brings the fire. On more than one occasion I was reminded of Jay Z’s “Takeover”: In white Keds and thick-rim glasses, Roach crushes itty-bitty ants with a sledgehammer.

On a serious note: This is a play that young people of color need right now more than ever. Furthermore, it serves as a reminder that this is the kind of tale that generations of black and brown kids (such as the characters in this play) have not had due to lack of access or lack of existence. It’s a play that speaks to a good many of the eternal truths of youth but is also firmly and unapologetically rooted in a culture that many parts of our country still choose not to respect.

“You have to feel the joy,” Luann instructs Hank as she opens his mind and heart to the world of freestyle. And feel the joy we do. And the struggle. And the hope. (Kevin Greene)

Haven Theatre at The Den Theatre, 1333 North Milwaukee, haventheatrechicago.com, $15-$32 with a limited number of free tickets for CPS students. Through November 12.