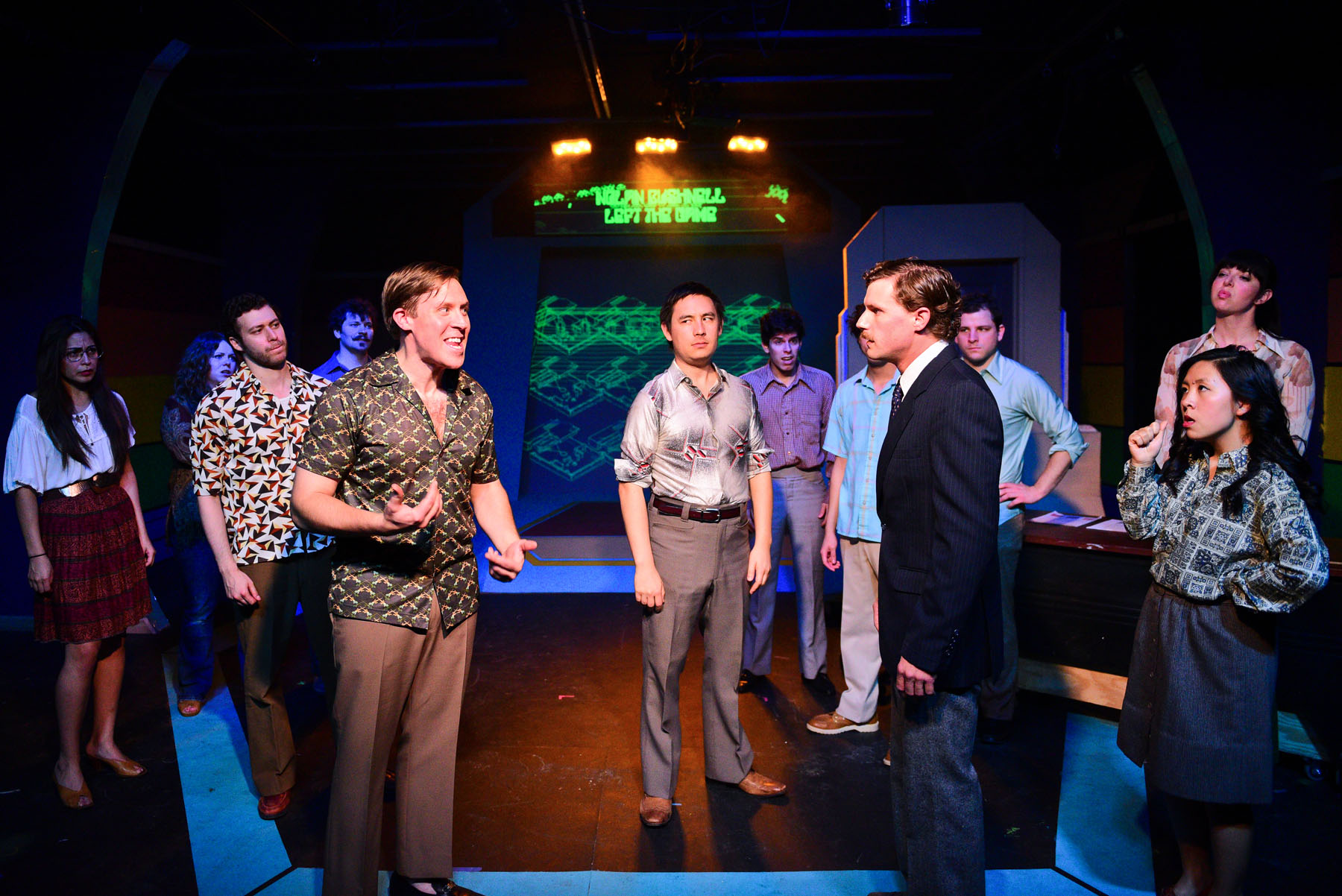 Michael Peters, Fin Coe, Will Cavedo and Stephanie Shum with the cast of “Merge”/Photo: Evan Hanover.

Spenser Davis’ “Merge” is a rags-to-riches-to-ruin-to-rebirth tale set in the salad days of Silicon Valley. As the seventies make way for the eighties (not quite as drastically as in P.T. Anderson’s “Boogie Nights” but with similar overtones of suspicion and dread), Davis’ play descends deeper into the virtual world until it resembles the “The Social Network” as imagined by Katsuhiro Otomo or perhaps just a pixelated “American Psycho.”

Did I mention it’s a comedy?

“Merge” concerns the birth of the gaming industry and the sockless, perma-stoned pioneers at Atari. Davis nails essential plot points: Two starry-eyed friends set out to change the world, money gets in the way, one betrays the other, the company grows beyond its means, a corporate interest steps in, they enforce a dress code, the original founders are dismayed at the corruption of their idyllic hippie dream.

At ninety-minutes, “Merge” doesn’t do much ruminating. The play has an over-the-top energy that keeps it moving at a blistering pace. And while the speed means that Davis and director Andrew Hobgood are able to cover several decades worth of history in truncated vignettes, it does lead to gaps in the narrative. Furthermore, the urgency of the dialogue occasionally made for lapses in individual performances.

Then there’s The Screen. The stage is designed to look like the inside of a video game console à la “Tron.” At the back of the stage is a giant screen that projects 8-bit graphics throughout the play. However, given the frenetic and engaging scene work, much of the design (courtesy Paul Deziel) is missed. The projections serve the play best when they are fully integrated rather than as used as gratuitous set dressing.

“Merge” is as much about choosing what world you want to live in as it is about the history of video gaming. In that regard, this play needs to pick what kind of a world it is in: a zany, yet dramatically grounded historical comedy or an elevated adventure where the possibilities are endless. (Kevin Greene)