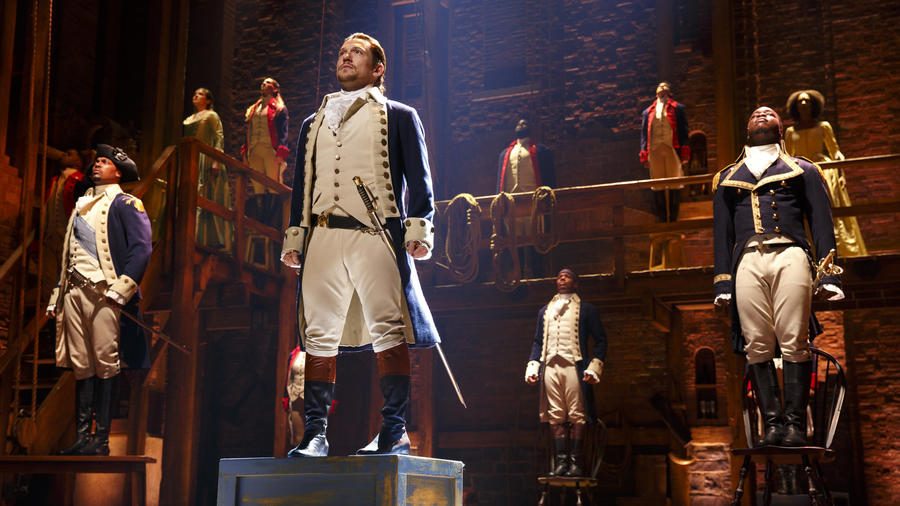 The cast of “Hamilton: An American Musical”/Photo: Joan Marcus

At long last history arrives: Lin-Manuel Miranda’s course-altering “Hamilton” arrives in Chicago not without a touch of Napoleonic ambition, which serves it well for this is no trifling revival or bussed-in tour. This is the show of the moment putting down roots and anchoring itself in the fertile soil of Midwest musical theater. This current iteration lives up to the exospheric hype with which it arrives. And while it may not be Manhattan, nine times a week, until the gods (or their producers) see fit, this is the place to be.

All the integral moments of this musical arrive with equal parts power and grace: the lovesick infatuation of Angelica (Karen Olivo) rendered as electrifying verses in “Satisfied,” the head-spinning verbosity of Chris De’Sean Lee’s Lafayette in “Guns and Ships,” the dripping spite and scorched earth of Eliza (Ari Afsar) in “Burn.” Deftly directed by Thomas Kail with diamond-sharp choreography by Andy Blankenbuehler rendered runway ready on David Korins’ utilitarian set under Howell Binkley’s dazzling lights, the outstanding production elements allow the performers to hurtle like comets through the atmosphere of our senses: hot, fast and ready to make a tremendous impact.

There seems to be a touch of nudging and winking going on with this cast perhaps in acknowledgement that more than a few members of the audience each night will come with the words (and performances) of the Original Broadway Cast Recording etched like a groove onto their brains. Though maybe it is simply a case of certain deliveries being better served by visual accompaniment: Alexander Gemignani as the jilted King George, De’Sean Lee doing double duty as the pithy Lafayette and the swaggerific Thomas Jefferson (channeling his inner Prince in a royal purple frock coat) and Jonathan Kirkland as the totemic George Washington, just to name a few.

Humor, broad and pointed, physical and verbal, abounds but the driving force of “Hamilton” is its web of relationships, which here feel sticky and dense, clinging to the bones of your memory long after you’ve left the theater. Ari Afsar’s Eliza is so insistently bubbly, her smile so sincerely broad, that the revelation of her emotional corrosion as a result of her husband’s selfish prioritizing is a tragedy that haunts the second act. Joshua Henry’s portrayal of the slow unraveling of Aaron Burr is exquisite. He spools out confidence and regret, intertwining them until the man we see before us is unable to disentangle himself from his own idea of himself. His solos in “Wait for It” and “The Room Where It Happens” are showstoppers. Each concluded with long, deafening applause. And rightly so. Among a group of talented singers and capable rappers, he represents this show’s greatest asset.

You’d be forgiven for thinking Henry was the star of this production. That is due, at least in part, to the one element of this show that underwhelms and it is unfortunately a large one: Hamilton himself. Or more specifically the actor who portrays him. With the weight of the world on his shoulders and his own legacy (as well as that of the country he helped found) bearing down on him, Miguel Cervantes is missing Alexander Hamilton’s urgency. Again and again we hear refrains about time and Hamilton’s perception of its scarcity. And yet, Cervantes seems so often unhurried: his rhymes lethargic, his singing muted, his energy notches below his counterparts.

There is no cover for this deficiency as the action of the play is always, in one way or another, relating back to the man whose name is on the marquee. Cervantes’ Hamilton lacks the attributes that those around him proclaim, namely that he is a braggart with the skills to back up his boasts. He clearly relishes power (there was a noteworthy upshift in energy when he is recalled by Washington to prepare for the Battle of Yorktown) but an important aspect of Hamilton is his relentless self-confidence. It is the very thing that helps him to survive and is ultimately his undoing. It is no less than the moral fiber of this entire musical. Cervantes does not possess nearly enough joie de vivre in the first half and subsequently there is not the same depth of defeat in the second.

Despite a leading man who needs to take some cues from his outstanding supporting players, this is nevertheless an unforgettable production of a show that will hopefully pave the way for a new generation of musical theater. Perhaps one day in the not-too-distant future actors will be listing “rapping” on their resumes alongside singing and dancing. Maybe this is not in fact a spectacular momentary excursion but rather a movement unto itself.

History will be the judge. (Kevin Greene)

Broadway In Chicago at the PrivateBank Theatre, 18 West Monroe, (800)775-2000, broadwayinchicago.com, $65-$180 with a limited number of $10 tickets available for every performance via digital lottery. Open run.