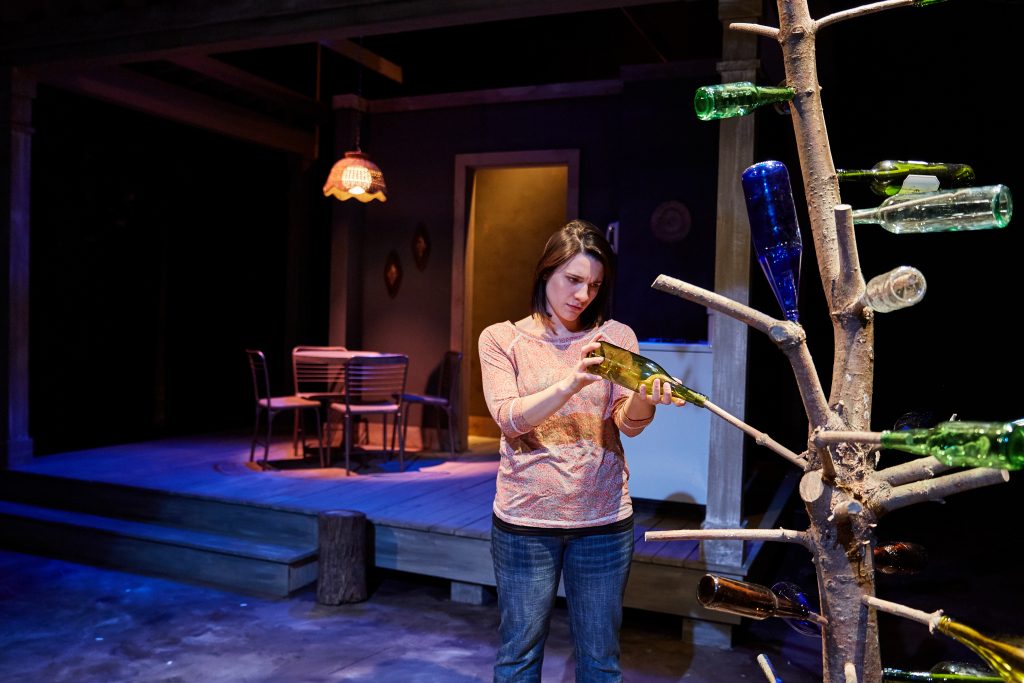 The first truly dramatic turn in Beth Kander’s “The Bottle Tree” comes when a documentarian launches a volley of probing questions to Alley, the younger sister of a school shooter, about her stance on gun control. Alley (Kathryn Acosta) responds without deflection. This is the first time we’ve witnessed her express feelings about her brother’s actions beyond embarrassment. It marks a turning point in Kander’s play.

Unfortunately this moment occurs within the play’s final fifteen minutes. The bulk of the play really has very little to do with gun violence. It notes some overlap between family rituals and the culture of gun ownership, a philosophy that liberal America tends to be hostile toward, sometimes rightfully so. “The Bottle Tree” seems invested in humanizing gun owners but it does so at the expense of investigating why guns are so important to those who own them.

Bookended by the aforementioned interview, “The Bottle Tree” largely takes place ten years prior during a teenaged Alley’s first year of high school, not long after her brother’s actions. Additionally there are some vignettes with Alley’s great aunt (time travel here is a fascinating yet underdeveloped narrative device), which mostly confuse the moral center of this play. Her great aunt’s rifle is a family heirloom of some import but also the butt (if you’ll excuse the pun) of some inopportune hillbilly humor.

In its quest for charitable impartiality, “The Bottle Tree” often feels like it doesn’t exactly know what it wants to say. Kander’s play, a world premiere, clearly means well and is nothing if not fair. Nevertheless, there are problems. The final moments are too on-the-nose. Moreover they come out of nowhere. Yet, the play could afford to be more contentious over all and with some diligence could evolve into a thornier and more challenging work that retains its sympathies for those who find the Second Amendment more important than the amendment that precedes it. The alternative is to do away with the framing device altogether and focus on the atmosphere of tragedy and the slippery subject of responsibility.

There are variations on both of these options currently running in town (“The Burials” and “Bobbie Clearly,” respectively), which might sway Kander one way or the other. If Alley is capable of making a strong choice then it stands to reason that her creator is too. (Kevin Greene)