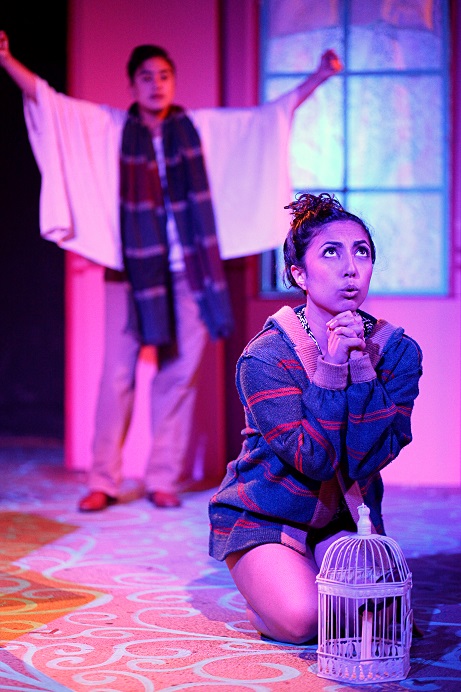 The inaugural production of The Jades, a young storefront company dedicated to “lifting diverse, underrepresented voices and providing a platform for female-identified artists” is a head scratcher. A nonsensical magical realist tale, “An Almanac for Farmers and Lovers in Mexico,” is about, of all things, a young woman’s unshakable intention to marry a man.

A key component of this genre is embedding the magic into the mundane so that both acquire the characteristics of the other through a kind of osmosis. While there is a touch of wizardry here, there is little that resembles realism. When they are not speaking in abstractions (“This could signify anything” is a line more true than I think playwright Kate Tarker intended), characters tend to shift melodramatically and without warning into fits of extreme exaggeration, often taking the form of overacting that proves far too much for the close confines of The Frontier.

While love may make us crazy, no one here seems to actually be in love though on a few occasions the play hints at the complexity of romance. At one point, a female character states that she does not want to “be together” with her male counterpart but she does want to make out. It’s the closest this play comes to a nuanced blend of attraction and reality.

“An Almanac” spends far too much of its time running in place narratively and emotionally. At nearly two hours without an intermission, the play strains patience as one scene after another passes with no identifiable through line, as if each was selected from a different draft. At its conclusion, there is neither a moral nor an explanation to be found.

While “An Almanac” ostensibly fits The Jades’ stated mission (Avi Roque, who is trans, leads the ensemble which consists of a few women of color), it unfortunately does not excite the imagination in terms of what this company will do next. Perhaps it is a case of too much, too soon. There is clearly ambition, however misplaced, and joy behind this project that could be harnessed into something better coordinated and more rigorous. In the meantime, a few pair of outside eyes will help this company develop its idiosyncratic potential. (Kevin Greene)

The Jades at The Frontier, 1106 West Thorndale, analmanac.brownpapertickets.com, $20. Through November 13.