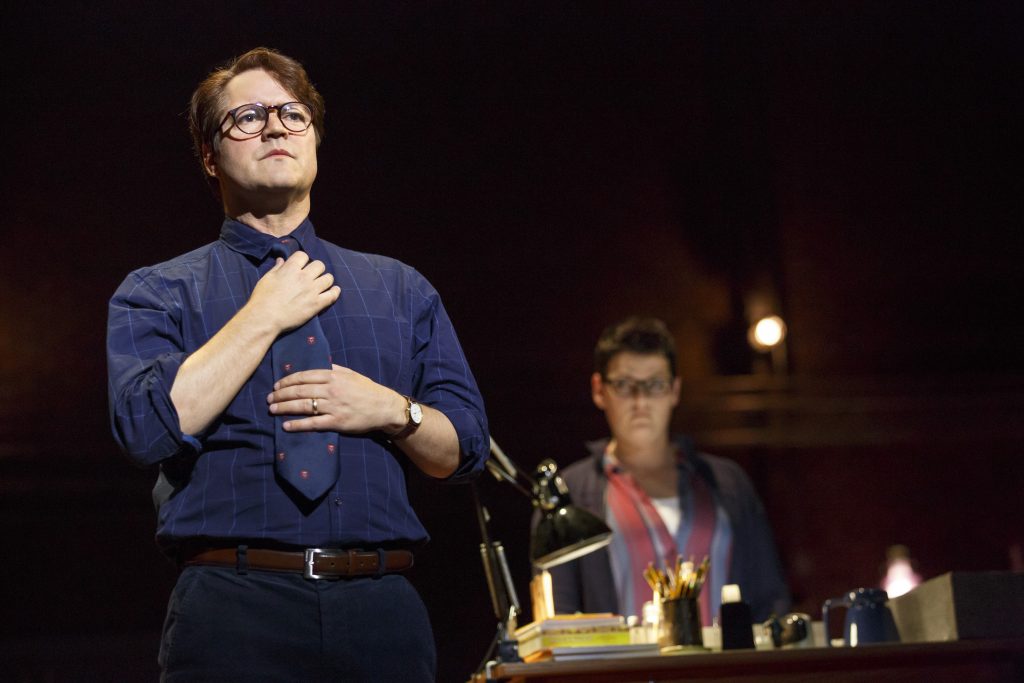 Given the glut of critically respected and commercially successful movies and television series based in the universes of Marvel, DC and others, it’s safe to say that comics, long revered in quiet but dedicated corners of fandom, have gone fully mainstream. And really, it’s about time. Anyone familiar with the work of Alan Moore, Frank Miller or Art Spiegelman can tell you about the psychological depths that some of the best comics plumb. Furthermore, comics are a compositionally malleable medium, which leads to plenty of crossover potential in the cinematic arts.

And yet, the theater world has hardly registered the impact of the rise of the popularity of comics. The noteworthy exception is “Fun Home,” a graphic memoir by Alison Bechdel about her volatile, closeted father and his impact on her sexual identity. Adapted into a Tony Award-winning musical with book and lyrics from Lisa Kron and an animated, harmonically satisfying score from Jeanine Tesori and currently on its first national tour, “Fun Home” is a non-linear, subjectively driven tale of estrangement and self-discovery that attempts to present itself objectively. It is destined to fail by design in this pursuit, much to the delight of those who appreciate the inner workings of the artistic process. Like “8 1/2” or the films of Charlie Kaufman, “Fun Home” embodies the chaos, uncertainty and narcissism inherent in the act of creation and reflects it through a distinct artistic style.

Even with Bechdel’s relatively straightforward visual vocabulary, the staging of this production poses some problems. The proscenium renders much of the action flatly, which can feel at odds with the atmosphere of intense introspection and the soaring sentiments of infatuation and longing. While the production begins in minimalism, in its second half the artistic team evidently decided that the suggestion of atmosphere through carefully designed props was not sufficient and they transport us directly into the Bechdel home in all its fastidious refinement. Ironically, the rigid authenticity of the set works against the fluidity of the narrative that features a grownup Alison moving between memories of her youth and adolescence and from diners to dorm rooms.

A highly personal work, performed with sincerity and smarts, “Fun Home” is a manifestation of its own mission statement: visibility as an essential component of self-worth. This means that, as this tour rolls on, future Alison Bechdels will have the opportunity to see themselves represented on stage. (Kevin Greene)