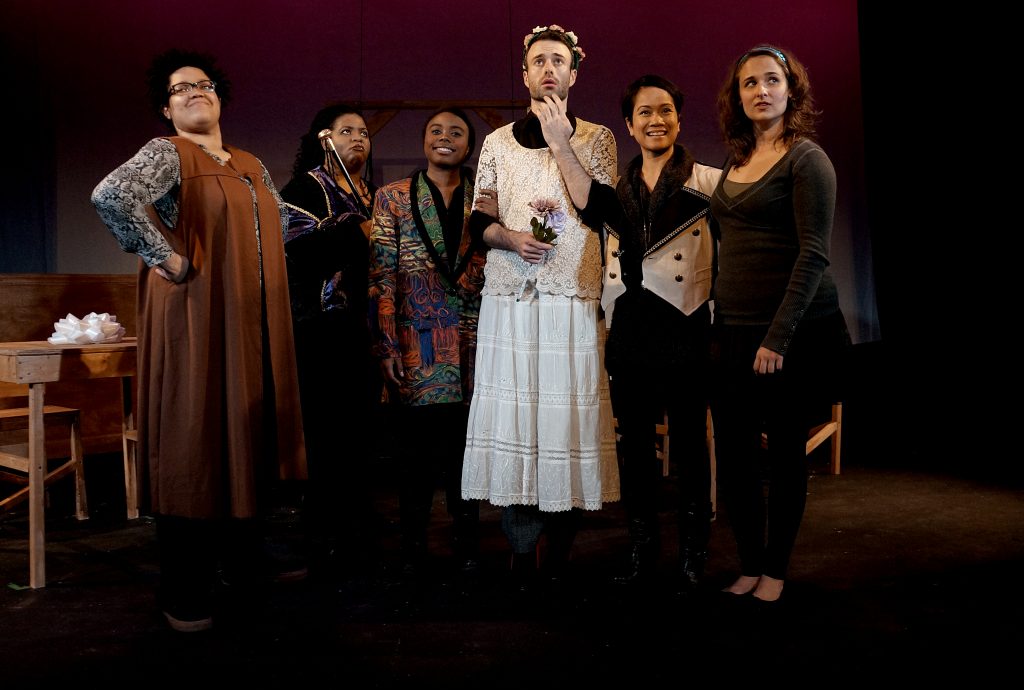 To say that the reputation of “The Taming of the Shrew” is complicated would be letting it off easy. Though the play has long been one of Shakespeare’s most popular and widely produced comedies, inspiring both the Broadway musical “Kiss Me, Kate” and the nineties teen classic “10 Things I Hate About You,” it’s become impossible to ignore that the play’s view of gender politics—screw that, the play’s view of women, full stop—is positively Cro-Magnon. If Donald Trump had a favorite Shakespeare play, “The Taming of the Shrew” would be it. (To be clear: there is no way Donald Trump could even name a Shakespeare play, let alone a favorite one.)

With “Shrewish,” director Barbara Zahora turns the play’s innate misogyny on its head. The show begins with a group of…well it’s not exactly clear. They could be fairies (à la “Midsummer Night’s Dream”) or they could be witches (à la “Macbeth”). Whatever they are, they are a group of women who can do some serious magic. After one of them (Savanna Rae) goes on a date with a douchey, self-obsessed bro (Dan Wilson), the group decides to show this man what it’s really like to be a woman. And voila! The bro finds himself playing the role of Kate. This is no longer a play about a woman being tamed but of a man learning how all women have to play “the game.” And more importantly, it’s about women getting to take charge.

The production itself, however, could use some work. The cast is game, and every actor is able to find some lovely (and really funny) moments throughout. Too often though they are encouraged to go broad. The show’s lack of purposeful staging doesn’t help either. Most of the scenes involve two or more people standing next to each other, talking half to themselves, half to the audience. Furthermore, The Edge Theatre’s proscenium space screams “high school auditorium.” “Shrewish” gets great mileage (and a lot of fun) out of fudging Shakespeare’s script, but too many aspects of this production feel fudged as well. (Alex Huntsberger)