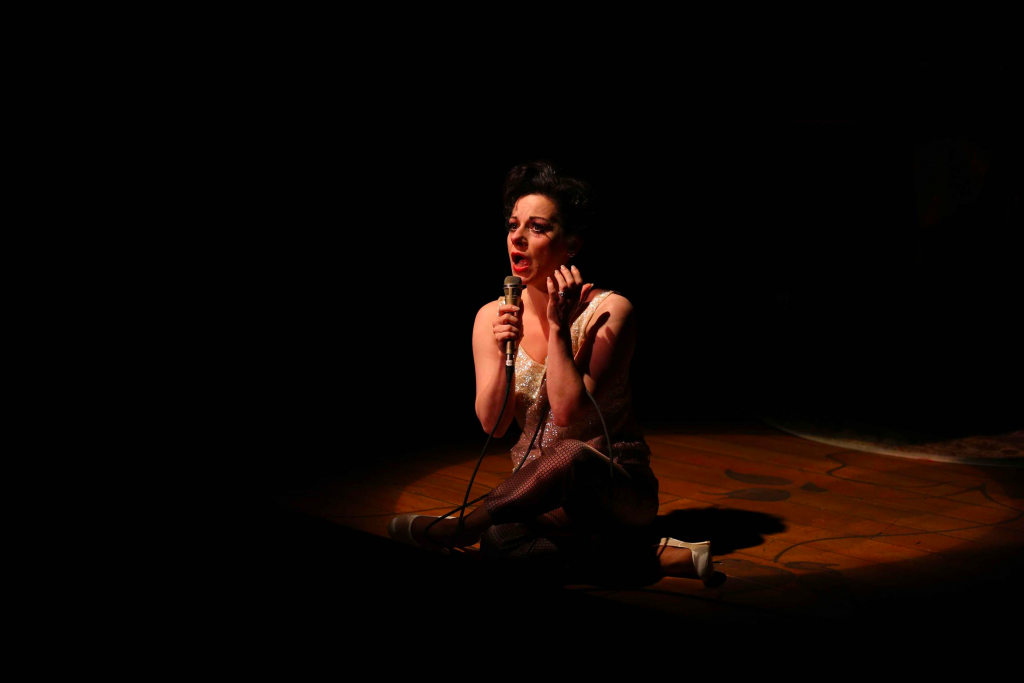 She enters the stage and she’s glitching. She’s speaking fast and emphatically in a voice that’s too high pitched. She keeps scooping the air with that familiar flourish somewhere between a pageant queen and a magician’s assistant. She’s jittery and profane. Every once in a while her parts crystallize into something so brilliant, profound and glorious it almost pains you as much as it must pain her. You think: by gum—if it’s not Judy Garland.

It’s London, 1968, and the star (played by Angela Ingersoll), now forty-six, is struggling to rise again. By her side in Peter Quilter’s “End of the Rainbow” are her new beau/manager/soon-to-be fifth husband, Mickey Deans (Kyle Hatley), and her favorite pianist, the patient, portly, dryly humorous Anthony Chapman (Jon Steinhagen).

Their strategies for containing the pill-popping, whiskey-soaked superstar are misaligned. Mickey is controlling and enabling, first furiously confiscating Garland’s pills and then desperately doling them out or even forcing them down her throat like vitamins or medicine. Sometimes he bellows at her and sometimes he holds her as she weeps. Anthony initially sneers at the erratic singer but reveals patience and devotion for a woman who everyone desires but nobody wants.

Nothing works because Judy’s essence is her chaos—her turbulent affairs, her emotions, her imperiousness—all a show for and the cause of her intense sincerity. She’s a woman for whom “negotiations” mean teetering on the edge of the balcony, threatening to jump. “I could vomit my dinner into my lap and I’d still be glamorous,” she snaps. She admits, as she scrabbles for cigarettes, alcohol, Ritalin, whatever she can get, “I am a professional. I’m just a little nervous.” She is all helter-skelter before she breaks your heart or blows the roof off the building or trips on her microphone and runs away at intermission. To ask for or command such talent is unconscionable.

If you have ever wanted to see Judy live, Ingersoll can show her to you in a remarkable performance that channels the forcefulness and fragility of the legendary woman. It will hurt. (Irene Hsiao)