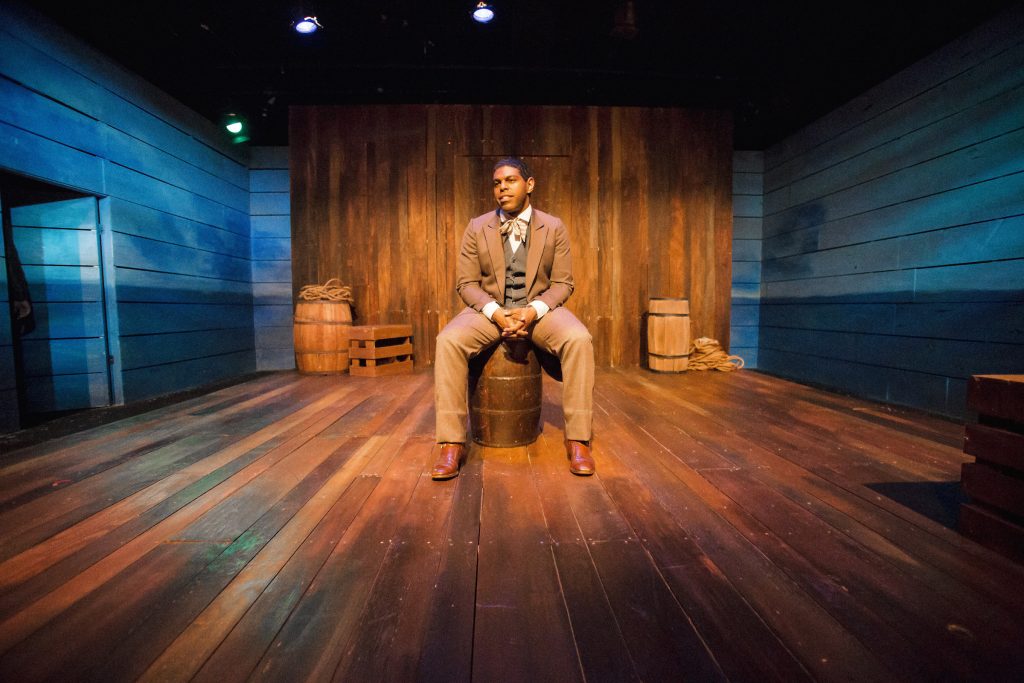 “Rutherford’s Travels” is this close to a visionary masterpiece. The world-premiere production is so near to greatness that we feel a twinge of disappointment when it settles, toward the end, for conventional pretty-goodness.

Based on Evanston-born author Charles Johnson’s prize-winning 1990 novel “Middle Passage,” the play is at once a gripping sea yarn with touches of “Moby-Dick” and “The Sea-Wolf,” while also being a moral fable and a searing expose of the slave trade as both a cosmic evil and a dollars-and-cents business venture.

The Rutherford in question is a freed slave from southern Illinois (yes, in 1830 there were enslaved people in the Land of Lincoln) who heads down to New Orleans to pursue the life of a petty thief and gambler. Breon Arzell is charming as the scalawag who finds himself in the clutches of racketeer Papa Zerinque (Darren Jones) and Isadora (Naima Hebrail Kidjo), a sweet-faced schoolteacher willing to blackmail Rutherford into marriage. Feeling ambushed, Rutherford stows away on a leaky ship with a brutal captain who trades in human cargo. There, this consummate hustler must, for the first time, take sides in the life-or-death struggles aboard the allegorically named Republic.

Director Ilesa Duncan and her design team create a fully-realized nautical world, capturing the ocean’s mystical serenity as well as its raging violence. Under Duncan’s direction, the complex and layered narrative—featuring a mutinous crew, rebellious captives and a mysterious African artifact—flies along like a clipper ship under full sail.

The dark heart of the tale is Captain Falcon, who aspires to omnipotence but is himself the pawn of others. Gary Houston skillfully underplays the part of the intelligent but amoral ship’s master, who admits to Rutherford that other people “are not real” to him and who runs the ship like a gulag. Andrew Malone also stands out as an enslaved African who is Falcon’s equal and opposite.

In “Moby-Dick,” Melville had the good sense to move beyond Ishmael once the scene had been set, shifting the focus to Ahab’s vast madness and its apocalyptic consequences. “Rutherford’s Travels,” however, goes small and safe at the end, failing to fully develop its grand themes of fate, freedom and memory. Like many journeys, it is the road itself and not the destination that proves memorable. (Hugh Iglarsh)