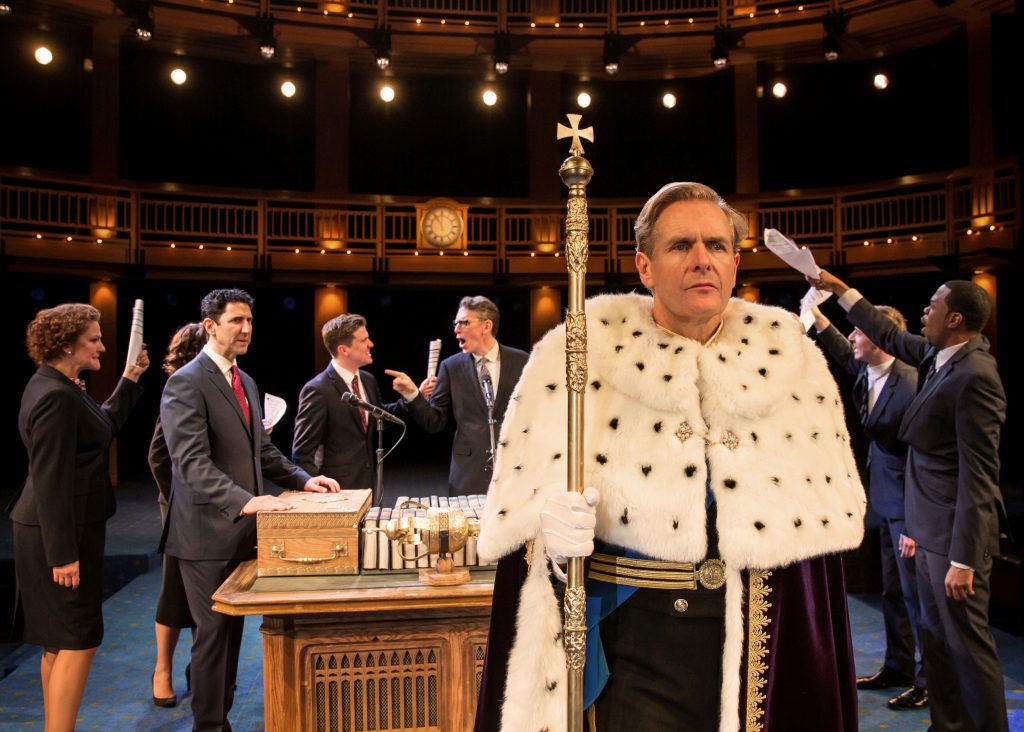 Of all the artifacts of our nostalgically driven present to resurface out of pop culture obscurity, Pokemon might be both the most surprising and, simultaneously, most fitting. With its idyllic setting and fully integrated set of technologies, the Pokemon universe, much like the “Star Wars” franchise before it, embodies a kind of future-past: a place where our current anxieties have already been resolved (though with plenty of room for sequels). Mike Bartlett’s brilliant new play “King Charles III” is dedicated to a similar purpose, serving as reassuring meta commentary in a time where the very ground beneath our feet seems up for debate.

As a work of speculative fiction, Bartlett sees no need to visit galaxies far, far away. Instead, he finds plenty to work with in the United Kingdom, some time in the near future following the timely passing of Queen Elizabeth II. Concerning the quickly curtailed rule of her heir apparent, Charles, Prince of Wales, and his combative exchanges with Parliament over a bill that would limit the freedoms of the press, “King Charles III” is a consummately English work, equal parts snark and smarts, not unlike the comedies of Armando Iannucci if the beloved British political satirist had a soft spot for the royal family.

The production’s cast includes fresh faces like Tyrone Phillips and Rae Gray alongside Shakes regulars Sean Fortunato and David Lively. At the center of the action is Robert Bathurst whose engraved sneer suggests not even the slightest waft of the role he is perhaps best known for on this side of the pond: Sir Anthony Strallan on “Downton Abbey.”

As compared to Jonathan Pryce in “The Merchant of Venice” earlier this year, Bathurst is not a main-event performer though he compellingly conveys a mix of petulance and moral certitude. “King Charles III” is arguably less concerned with its namesake than its title suggests. Rather, Bartlett endeavors to fill in the narrative gaps in our imagination as they pertain to celebrity (think “House of Cards” meets Todd Haynes or, better still, Calamity West), matching intrigue with emotional insight.

Drawing on a true and truly deplorable manipulation of power on the part of the media, Bartlett uses the stage to question the legitimacy of the inverted pyramid of power known as democracy while never taking the absurdities of tradition for granted. As per the change makers of his country (and elsewhere…), “King Charles III” concludes that they are, for better or for worse, just like us. (Kevin Greene)